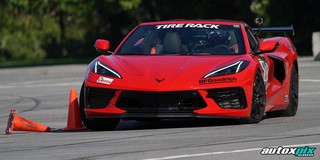 After the 2020 Tire Rack SCCA National Solo schedule came to a halt mid-summer, events resumed this past weekend with the second Championship Tour of the season at Bristol Motor Speedway in Bristol, TN. Temperatures were about 10 degrees cooler than the typical July event at the venue, which led to a comfortable weekend of competition in Thunder Valley.

The honors for the largest class of the weekend belong to CAM Contemporary with whopping 16 drivers. Chad Englert led through day one in his 2013 Ford Mustang, but being in a solid-axle car put him at a disadvantage over the bumps at Bristol. On day two, Randy Adkins—in his Ford Shelby GT350— capitalized on Englert’s disadvantage, took the lead on his first run and held on to claim the win by 0.124 second. Englert settled into second with a comfortable 0.739-second advantage over Jadrice Toussaint in third. James Thomas and John Ward claimed the fourth and fifth trophy positions, respectively.

It isn’t unusual to see Eric Peterson at the top of the E Street standings, and that’s exactly where he sat at the end of Saturday’s competition with a 0.686-second lead over Cory Barr. On Sunday, a first-run DNF put Peterson a little behind, but he took back the lead on his second run. It looked like that’s how they would finish until Barr found a massive 1.158 seconds on his third run and took the win by 0.533 second. Peterson held onto second ahead of Kevin Lindley in the third and final trophy position.

In Solo Spec Coupe, the battle was still quite open at the end of day one as Karl Rickert led Tyler Kvetko by 0.097 second with just 0.040 second back to David Spratte in third. Day two started with Kvetko jumping to an early lead, closely followed by Thomas Lackey. That’s how it stood until Rickert cleaned it up and found time on his last run to take over the lead by just 0.037 second with Kvetko and Lackey claiming the two remaining trophies. This is Rickert’s first trophy in his SSC car and his first tour win in 15 years.

It didn’t take long for Super Street to be overtaken with 2020 Chevrolet C8 Corvettes. The class of five drivers, all in 2020 Corvettes, handled the Bristol bumps well, with the top three drivers staying within 0.5 second all weekend. Robert Clark led at the end of Saturday’s runs, closely followed by Mark Canekeratne. On day two however it was Clark’s co-driver, Robert Pendergest, who set the fastest pace, leaping ahead of Canekeratne to take over the second position, just 0.145 second behind Clark who held onto the class win.