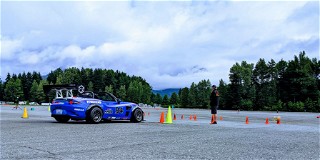 The 2020 Tire Rack SCCA Championship Tour moved to the west coast this past weekend and the prized Packwood Champ Tour at the Old Hampton Mills lumber yard in Packwood, Washington.

As always in the Pacific Northwest, the threat of rain remains imminent throughout any given weekend. Good fortune smiled on the 216 competitors on the entry list, however, and the course remained dry throughout the two days.

And in thrilling fashion, three classes came down to the final runs.

In Street Touring Roadster, Joe Goeke gave way to Rex Ayers, but Mark Ayers put down an early flier with a cone that announced himself as a contender. When that run became clean on his third and final run of the day, he claimed the class win over Goeke by 0.286-second.

In B Street, Andrew Kessel slept on the overnight lead. That lasted until Dan Bullis swept to the front on his final run. Needing to find some time, Jason Bucki came to starting line as the final class car of the weekend, then lowered his time by eight-tenths to claim class victory in thrilling fashion.

Austin Minnick used his final run on course to drop his best time to sweep to the front of the Street Touring Xtreme field. Though not the quickest on Sunday, his Saturday lead left him with enough of an advantage to remain in front of Alex Paraskevas, Glen Hernandez and co-driver Jonathan Mudge despite being the slowest of the group on the final day.

The big money is in Super Street, and they certainly squeezed every penny out of it at Packwood. Kit Gauthier’s Porsche GT3 edged out Ryan Otis’ Chevrolet Camaro and Monty Pack’s Porsche GT3 by just 0.035-second and 0.084-second, respectively, in the closest battle of the weekend.