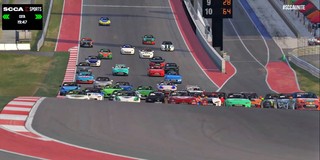 As the Hoosier Tire SCCA eSports Super Tour headed to its sixth stop, we found ourselves deep in the heart of Texas. They say everything is bigger in Texas. That applies not only to their ten-gallon cowboy hats, but also their Formula 1 racetrack, Circuit of the Americas, located just outside of Austin, Texas. Track limits proved to be a factor, but that didn’t stop great eSports racing as some of the best virtual SCCA racers hit the track this past Saturday.

When it comes to Spec Racer Ford, one thing is for sure: You can’t be sure who will be standing on the top spot of the podium at the end of the race. This isn’t from a lack of talent, however. Drivers like Kucera, Patrie, King, Tibor and Ray have all finished an SRF race in the top spot, but none have been able to do it twice. And that wasn’t going to change at the Circuit of the Americas.

A competitor since the beginning, young Jackson McLeod has been in the hunt for the win on multiple occasions, standing on the virtual podium in every spot except the top at least once. Until this last Saturday, that is. Qualifying in the top spot, McLeod got a great start and never looked back, holding first place from pole to gold. Steve Ray, who gridded up beside him, followed McLeod to the finish in a slightly distant second after taking the top slot at Road America the week prior.

With those two checking out on the field, the real racing was for third. While there were four drivers battling for the bronze spot, it came down to Caleb Patrie and Larry McLeod. Patrie—who ran in the third spot for most of the race—went wide at the end of the third-to-last lap, incurring a track-limit penalty. That penalty allowed Larry McLeod to take the spot from him. But as they hit the long straight leading into the stadium section on the last lap, McLeod could see the white and red smiley face of Patrie’s car filling his mirrors. Patrie, who had worked hard to climb back into contention, capitalized on the excellent drafting opportunity to get past McLeod and back into third, where he finished the race.

The second race of the day was made up of Touring cars. Here, two different classes took to the track at the same time—Touring 1 (T1), consisting of Porsche Caymans, and Touring 2 (T2), featuring Ford Mustang FR500S vehicles.

From the start, T1 pole sitter Tom O’Gorman was hounded by both DJ Alessandrini and Paul Darling. While Darling eventually fell off with around eight minutes left in the race, and was passed by Ken Houseal, Alessandrini doggedly tested and tried O’Gorman the entire race. The clean and competitive racing found the two side by side many times, but O’Gorman proved he was up to the challenge and finished just ahead of Alessandrini, with Houseal rounding out the podium in third.

In T2, pole sitter Mark Shrivastiva and his grid mate Chris DeShong led the charge from the green flag, but it was DeShong who set the pace. Getting a good run off turn 11, DeShong pulled alongside Shrivastiva going into turn 12, making the pass stick as they entered the stadium section. From that point, those two slowly pulled away from the rest of the field. Speaking of, Ryan Field, was the eventual third-place finisher, having notable battles with both Daniel Richardson and Jeff Jacobs for the last podium position.

This race is as much about having a good dancing partner for the draft as it is about staying clean. Both of those came into play at COTA this past Saturday.

The race started with Reece Everard and Andrew Whitson, the first row of the grid getting a clean start to the race. Billy Davis and JT McClintock—gridded in the second row—didn’t fare as well, as Andrew Abbott got an excellent start coming up from eighth on grid to jump in front of both into third place.

Everard and Whitson swapped places on the first two laps, with Whitson in the lead for the start of the third lap. He and Evan Rakosin, who had climbed up into fourth, touched going into turn one, dropping Whitson back from the leading group. Rakosin then received a track limit penalty heading into turn 11, which dropped him out of the lead group as well.

That left Abbott paired with Everard, followed by Davis and McClintock pulling away ever so slightly. Davis, in third, found an opportunity to challenge for the lead going into turn 12 on the second-to-last lap, but couldn’t make it stick. The start of the last lap saw Everard in the lead, Abbot in second, and Davis in third. Abbott got a great run out of turn 11, forcing Everard to defend the inside as they approached turn 12, a hard-left hander. As Everard took the inside, Abbott shot past on the outside, and took the lead as they went into the stadium section. Abbott, Everard and Davis continued to battle, but crossed the finish line

It was an interesting start for the Big Bore race group, as the field had a mixed start. With the GT-1 Caddy and the GT-2 Porsche making speed in different ways, it was up to the drivers to do their best to get a clean start, but there was a bit of chaos at the green flag.

In GT-1, Miles Crabbe and Chris DeShong led through turn one, with Mike Leeder in third behind a group of GT-2 Porsches. Crabbe would slowly pull away, working up to a four-second lead for most of the race. But, as is often the case in mixed class racing, lapped traffic played a factor this weekend. On the second-to-last lap, Crabbe ran into traffic in the esses, allowing DeShong to plant himself on Crabbe’s rear bumper going into turn 11. Seizing his opportunity, DeShong dived down to the inside as the two entered turn 12, taking the lead. From there, the two continued to battle, but it was DeShong leading Crabbe across the finish line, with Leeder a distant third.

The GT-2 race was a bit of a runaway at COTA, as DJ Alessandrini got a great start and never looked back. Caleb Patrie, who started second fell back at the start, allowing both Christopher Piaz and Tom O’Gorman by. Despite taking the car for a quick spin in turn one early on, O’Gorman was able to work his way up into second, passing Piaz in the stadium section about halfway through the race. Patrie was also able to get by Piaz in the waning stages of the race, allowing him to come home in the final podium position.

Global MX-5 had a clean start, as everyone made it through turn one clean. Six cars wide at one point, all drivers filed in and made it through the iconic uphill left hander. Leading the pack was top qualifier DJ Alessandrini, followed by the extremely quick Ken Houseal and the ever present Tom O’Gorman. Those three, along with Nathan Saxon and Selin Rollan were able to break away from the rest of the pack.

Houseal made a great pass heading up the hill to turn one around the halfway point to take the lead, moving Alessandrini into second. Alessandrini then went wide exiting turn nine, forcing him to take a penalty which allowed both O’Gorman and Saxon by. With five minutes left, it was O’Gorman who incurred the track limit penalty going into turn 19, which let both Saxon and a hard-charging Alessandrini by, as they headed into turn 20 and on to the main straight past the grandstands.

Alessandrini continued his charge, making his pass on Saxon stick to climb back into second place coming into the stadium section on the second-to-last lap. That left him just behind Houseal, who had been running a flawless race in first place while keeping both O’Gorman and Saxon at bay. Those two drivers swapped places multiple times in the last lap, with O’Gorman making a final move, just edging Saxon out to take third as they crossed the finish line. Houseal was able to hold off Allessandrini, running a quick and tidy final lap to secure a well-earned top spot on the podium. The race ended with Houseal, Allessandrini and O’Gorman on the podium in Global MX-5.