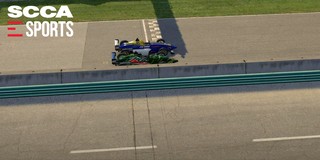 Round five of the Hoosier Racing Tire SCCA eSports Super Tour saw a return to normal action at the home of the 2020 SCCA Runoffs, Road America last Saturday, May 2. After an electrifying Team Valvoline ProAm 50 at Watkins Glen, one might worry that there would be a letdown coming off the excitement of the previous weekend, but that couldn’t be further from the truth, as each of the five run groups—all streamed live for spectators—was action packed and just as satisfying as a heaping basket of the native state’s cheese curds.

Always in the mix, but yet to get that elusive top podium spot, Steve Ray finally broke through at Road America to secure his first Hoosier eSport Super Tour victory. But it wasn’t easy. While Ray qualified on pole, the draft ensured he didn’t stay there long as after being overtaken by Patrie and Grau going into turn five, Ray wouldn’t lead again until going into turn one on the second-to-last lap. From there, the race was on.

“It got crazy going three wide through turns five and seven,” Larry McLeod said after the race when asked about that last lap. McLeod, who finished fourth, took advantage of a late dive on Caleb PatrIe by Jackson McLeod going into Canada Corner on the last lap, which pushed both drivers wide. That was when Steve and Larry pounced, taking the inside line and getting a great run up to turn 14.

“I wasn’t able to get on the gas as early as the other folks, coming out of 14, so I knew if I stayed behind Steve, I had no chance,” Larry said when asked about his strategy going through the last corner side by side with Steve. “I had plenty of momentum coming up to 14, and had a line, but we had a bit of side contact coming out, and that killed all of that momentum. At that point, I just stayed middle track and watched as Caleb and Jackson each picked a side and pulled past my up the hill.”

Steve Ray drove away from the contact, and up the hill for his first win, with Jackson McLeod and Caleb Patrie finishing second and third, respectively. Those top four drivers finished the race with less than a half second separating them.

The Touring 1 (T1) field of Porsche Caymans saw DJ Alessandrini once again in the catbird seat to start the race. Alessandrini made a great start in the Hawk Brakes liveried Cayman, holding off a charging Tom O’Gorman. With O’Gorman suffering some damage later in that first lap, Alessandrini went unchallenged the rest of the race to bring home the win.

However, there was some good racing from the second position on back as Tony Chow and Ido Waksman challenged one another in cars sharing similar performance traits. No strangers to this, Chow co-drove Waksman’s car at last year’s Tire Rack Solo Nationals, with Chow bringing home the jacket in F Street. Waksman, hoping for a bit of revenge, did a tremendous job of holding Chow off the entire race, which found the two drivers running side by side on multiple occasions. Chow made a great run off the last corner though, allowing him to sneak past Waksman to grab second place by just .047 seconds.

The Touring 2 (T2) race, made up of Ford Mustang FR500S vehicles, saw Mark Shrivastava in the P1 position at both the start of the race and the end, but that doesn’t mean he cruised to victory.

Ryan Field and Paul Slovonik both got by Shrivastava in turn five when he had to check up to avoid a late dive by Daniel Richardson. At that point, Shrivastava just had to bide his time. “I was trying to find my way past Ryan, but there was just no way,” said Shrivastava. “We were just to close in pace, so I decided to hang back and wait for an opportunity to get a good run out of one of the corners.”

His patience paid off, as Slovonik and Field came together coming out of turn two late in the race allowing Shrivastava to squeeze by, followed by Jeff Jacobs. Fields made a late push, getting back past Jacobs on the last lap, but didn’t quite have enough to regain the lead. That’s how the race ended: Shrivastava taking his first win with Fields in second and Jacobs in third.

The first few rows of the Skip Barber race were stacked with talent. Teammates Billy Davis and JT McClintock would lock out the first row, but going into turn one, Justin Hille—who started third—made a great run to take the lead. Andrew Abbott, who started fourth, hung back patiently to see how the drafting was going to shake out as Davis and Hille swapped positions. On the second lap, Abbott made his move going into turn four, grabbing second behind Davis. Those two then pulled away from the pack, working together to build a gap.

“I know Billy is fast”, Abbott said when asked about teaming up with Davis once he had made the pass. “It was just head down and work together from that point.”

The two began to battle in earnest on the last lap, using the intel each had been building on the other to make plans of attack. Davis led at the start of the lap, but Abbott drafted past him going into turn five. That left turn 14 and Canada Corner as the last two places Davis could make a run. Davis, quick off turn 14, made his move going into Canada Corner but came in too hot, forcing him to go wide and he ended up putting wheels in the dirt on exit. With Davis’ momentum lost, Abbott was able to cruise to the finish and secure the win.

During the race, with Davis and Abbott checking out, the rest of the field continued to battle and jockey for positions. Eventually, Hille and Rivard also broke away, making it a two-man battle for that last podium spot. The race for third came down to the last corner, with Rivard getting the better run off the final corner to beat Hille in a photo finish, a scant .014 seconds separating the two.

A great performance was delivered Saturday in GT-1 by both Miles Crabbe and Lawrence Loshak. Crabbe was on pole, and led a good portion of the race, but Loshak was able to take advantage of traffic, and made his move through turn five with about eight minutes left in the race. Once he got the lead, he did not relinquish it. Loshak took the win, followed by Crabbe in second and Mike Leeder rounding out the podium in third.

The GT-2 race found P1 Tom O’Gorman dropping back to third at the beginning of the race, as Caleb Patrie got a great jump at the start. O’Gorman worked his way back into second, and then began to slowly reel Patrie back in. Once again, traffic became a factor as O’Gorman was opportunistic coming through the kink, getting by Patrie going into Canada Corner. Patrie then made a run down the Road America straight, but ended up coming in a little hot to turn one, getting sideways and having to gather the car back up. Christopher Paiz, back a small distance in third, took advantage of Patrie’s kerfuffle, and moved up into second. That is how the race would end, with O’Gorman in first, Paiz in second and Patrie in third.

GT-3 saw some big moves at this scenic track. Pole sitter Billy Davis was involved in a bit of contact that saw him exit stage right into a wall going through the Hurry Downs, giving Maxwell Kittleson the opportunity to jump into the lead. Kittleson did his best to hold on to it, but it was the hard-charging Darin Treakle that managed traffic and made some great moves, coming all the way up from fifth at the start of the race and into the lead by the end. Kittleson held on for second, and Elias Roman rounded out the podium in third.

Just as in the real-life version, the long straights of Road America produced some great drafting opportunities for one of the hottest contested races of the night. Pole sitter DJ Alessandrini led a talented mix of drivers—including Tom O’Gorman, Justin Hille, John D Allen and Selin Rollan—into turn one at the start of the race.

While Alessandrini and O’Gorman were able to hold on to their spots, it was Rollan that made some big moves, coming up from eighth into third place to begin what turned out to be an epic battle between the three drivers all the way to the checker. While most of the race was very clean—with drivers making great moves and working the draft—the gloves came off on the last lap.

O’Gorman was in the lead as they entered turn one of the last lap, followed closely by Alessandrini, Rollan, Allen and Hille. Rollan made a move on Alessandrini going through turn two, tucking behind O’Gorman on the way down into turn five, where he got into O’Gorman’s rear bumper under braking, sending him wide on exit. O’Gorman wasn’t going to just roll over, though, and the two would have multiple touches from turn six and into the Hurry Downs. Alessandrini took advantage of this, splitting the two heading into the carrousel. O’Gorman, still in the lead, had a big wiggle coming out of Canada Corner, which Alessandrini took advantage of coming into the last corner and making a great run out—pulling past O’Gorman for his second win of the night. O’Gorman finished second and Rollan brought it home in third.