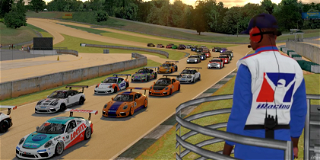 The Hoosier Racing Tire SCCA eSports Super Tour got underway with the first of seven official rounds on Saturday, from virtual Michelin Raceway Road Atlanta. Each event on the iRacing platform is open to SCCA members only. More information on the upcoming schedule, including weekly event locations, can be found here.

For participants, there is a change in qualifying for the upcoming event at Sebring. See the announcement here.

But on Saturday, the action was hot and heavy in five race groups.

Spec Racer Ford: The iRacing tire modeling seems to be extra intense on cold tires, and the Spec Racer Ford group found that out with a spin on the pace lap that scattered much of the back third of the field. The opening lap claimed a few more, but five minutes into the 20-minute distance, the field had settled in with Jake King, Caleb Patrie, Robert Kucera and Jackson MacLeod in a breakaway for the lead.

That group was trimmed to just Kucera and Patrie a few minutes later, and when Patrie fell off with 10 minutes to go, Kucera became the loan driver to run a mistake-free race and cruise to the win.

Steve Ray, outside the lead battle but ticking off steady laps, creeped to second place as the leaders fell off. Patrie, King and Miles Crabbe used the draft to close the gap to Ray on the infal lap, but finished in that order at the checkered flag.

“Early on, we were all taken by surprised by how hot the track got,” Kucera said. “I knew I needed to stay consistent, keep my head down, run some good laps, and hopefully come out with the win and I did that. This is an amazing race, and amazing event, and it was great to get online and race with people we know in person.”

Touring: The second race of the day was made up of Touring cars. Here, two different classes took to the track at the same time. There was Touring 1 (T1), consisting of Porsche Caymans; and Touring 2 (T2), which featured Ford Mustang FR500S vehicles.

In T1, polesitter DJ Alessandrini led flag to flag. But behind Alessandrini, a fun fight developed for the second through fifth positions. Patrick Gallagher led that second group, followed by Andrew Pallotta, Eric Kutil, Tom O’Gorman, Ismael Basso and Ken Houseal. But Basso took a ride into the gravel at turn 10A on lap two, taking him out of the hunt. O’Gorman slipped by Kutil for the fourth spot, then grabbed the third spot a few laps later from Pallotta. Kutil also slid back behind Pallotta and Houseal.

Gallagher, O’Gorman, Pallotta, Houseal and Kutil ran in that order through the race’s halfway point. Then with about eight minutes remaining, Gallagher slid off track after being tapped from behind by O’Gorman while braking for turn 10A, removing him from the battle and securing a second-place finish for O’Gorman.

Positions three, four and five in T1 were still up for grabs with Houseal, Pallotta and Kutil fighting side by side and nose to tail, using traffic and every trick in the book to sort things out. With two minutes left in the race, Kutil was able to slip by Pallotta for the fourth spot. Pallotta tried to make a final lap move on Kutil, but came in hard contact with another car. So, the top-five T1 finishing order was Alessandrini, O’Gorman, Houseal, Kutil and Pallotta.

The T2 race saw Paul Slavonik start on pole and jump to an early lead while Mark Shrivastava and Ryan Kristoff swapped the second position back and forth. Competitors Daniel Richardson, Bryan Horowitz and Dave Fitzgerald gave chase.

At race’s midpoint, Slavonik was still out front with Shrivastava hounding him. Meanwhile, Kristoff had dropped back from the top two and was being hounded by Richardson and Horowitz for the third spot. Kristoff succumbed to the pressure shortly after and slipped back.

The fun wasn’t over yet as Shrivastava, showing front-end damage from earlier contact, got around Slavonik for the lead with only four minutes left in the race. And Horowitz had gotten by Richardson for the third spot. Shrivastava, trying hard to hold his position, went a little off track and Slavonik got by, going on to claim victory. Shrivastava was also passed by Horowitz, but was able to get back around on the last lap to secure the runner-up position. Horowitz had an issue and slipped several positions, allowing Richardson to claim the final podium position followed by Fitzgerald and John Hainsworth rounding out the top five.

Skip Barber F2000: Turning a negative into a positive, cold tires, a 40-car field and a double-file green flag combined to see the open-wheel field bunch up at the midway point and send cars up and over each other in what NASCAR fans would call “the big one”. On iRacing, however, a jab of the reset button cleared the carnage and brought those cars to pit lane while the group of Jack Tranter, Billy Davis, Ryan Maloney, Jeremiah McClintock and Brian Farnham broke away from the field.

Maloney took the point with 15 minutes to go, and with two minutes to go there were just two drivers remaining – Maloney and Davis.

Davis held the lead at the white flag, but “let” Maloney slip by early in the lap. Driving virtual cars that race much like their real-life Formula Vee counterparts, Davis used the draft down the long backstraight to reclaim the lead, then hold on down Road Atlanta’s hill to the finish for victory by only 0.052-second. Tranter came out on top of the battle for third over McClintock and Farnham.

It was the GT-2 class that started out front of everybody, led by polesitter Tyler Maxson. He secured the front spot on the opening lap, followed by Caleb Patrie, Maxson performed expertly over each passing minute to claim victory by a margin of more than seven seconds over Patrie.

Manifesting itself behind the top two finishers was an age-old enigma that has consumed humanity and financial markets alike for thousands of years. That question? Which is better, Gold or a Diamond?

Five minutes into the GT-2 race, it was Adam Diamond sitting in third with an advantage over Reece Gold. But racing, as well as markets worldwide, can change in an instant as Gold became prominent a few minutes later after trading positions with Diamond. However, Diamond was not tarnished and soon shined bright by dropping Gold back to fourth again. Showing some mettle on the last lap, Gold closed back in and made a sterling attempt on the third position at turn 10A. However, it was Diamond who was rock solid and held on to the position. Sean Velandia finished fifth.

The GT-1 race got interesting in the first few corners as polesitter Ryan Otis got rear-ended, leaving AJ Roderick to claim the early lead. But Otis recovered to quickly fall in behind Roderick with Max Grau in tow. But five minutes in, Grau spun and ended up off track, gifting third to Steven Ford who was being hounded by Peter Zamora. With only about five minutes remaining, Zamora got by Ford to secure what looked to be a third finishing position.

But even in the virtual world, races ain’t over until their over. On the last lap, the exit of turn nine saw Roderick’s chariot peter out and come to a crawl. Otis easily moved by, executed a few more corners and claimed the GT-1 win. Zamora, too, slipped by Otis’ ailing car to take second. Grau bounced back to claim the third spot followed by Arne Henriksen and Andy DeLay rounding out the top five.

Opening laps of the GT-3 challenge were led by polesitter Elias Roman, who was being chased by Kyle Herbst, Maxwell Kittleson and Dennis Barret. Five minutes in, Herbst was by Roman for the lead.

Midway through the GT-3 race, Roman had dropped back several seconds from Herbst and was overtaken by Barrett going into corner 10A, with Kittleson and Mike Nachtigal not far behind. Then with only two minutes left in the race, Roman had an issue and fell down the leader board, leaving Kittleson to finish third and Nachtigal fourth. Darin Treakle took fifth.

Global MX-5 Cup: It would be unfair to call the Global MX-5 Cup race the “feature” just because it was last on the agenda. It would also be disingenuous not to acknowledge that many of iRacing and the real world’s Club Racing superstars saved their registration for this race to finish off the opener of the Hoosier SCCA eSports Super Tour.

Alessandrini, who took two of three in last weekend’s test run at Summit Point and the big bore race earlier in the day, was joined by O’Gorman, SCCA racing extraordinaire, on the front row. Runoffs podium finisher Kutil, Spec Miata up and comer Zach Rubin, and iRacing (and real life) superstar John Allen joined the front row duo and pushed away from the field, weaving through lapped traffic.

The fivesome split into pairs with around five minutes to go, with Alessandrini and O’Gorman in the front and Kutil and Allen giving chase. Lapped traffic helped Kutil and hurt Allen, and at the white flag the order was Alessandrini, O’Gorman and Kutil, with Allen left to make up a gap to the leaders.

Alessandrini, leading the trio, got a fantastic drive out of Turn 7 and onto the backstraight. That left third-sitting Kutil with two options – push O’Gorman to try to get both drivers in a position to challenge for the win, or make the move for second place and hand the win to Alessandrini.

With no points, dollars, or car damage on the line, Kutil pushed O’Gorman down the backstraight and the pair closed to, but couldn’t get around, Alessandrini at the finish. Allen joined the trio at the stripe but remained in fourth, just off the podium. Rubin finished fifth, five seconds behind the lead group.

The Hoosier SCCA eSports Super Tour continues next week at Sebring International Raceway. The first 40 SCCA members to register when the lobby opens will be able to join each run group, which includes practice before the streaming qualifying and race.

More information can be found at SCCA’s eMotorsports page here.