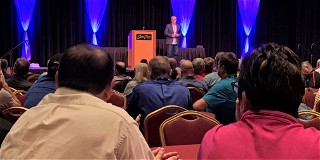 In 2019, Sports Car Club of America® noted its 75th Diamond Anniversary, the 56th National Championship Runoffs® and 47th Tire Rack Solo® Nationals. The 2020 SCCA National Convention begins tonight, kicked off with the Annual Meeting. But it’s kind of difficult to put a number on this gathering.

The history of the Club’s convention and Annual Meeting has evolved over time, just as the Club has. SCCA® bylaws dictate there must be an Annual Meeting each year. And thus, there has been. But as far as the Convention as it appears today, that’s something that has developed over time.

Up until the early 1980s, SCCA regions around the country hosted the Annual Meeting and a Convention-type gathering that included the addition of local flair. But in the early ‘80s, it was decided the SCCA National Staff would be tasked with organizing the event, and a more formal, seminar-style convention developed. This year’s SCCA National Convention will feature more than 100 helpful sessions held in 20 rooms covering 70,000 square feet of floor space at South Point Hotel and Casino in Las Vegas.

Speaking of Las Vegas, this is the fifth year in a row that National Convention has been conducted in the Neon Capital of the World at South Point. Overall, National Convention has been held in Vegas a total of 10 times including this year’s visit. Other locations have included Charlotte, Kansas City, San Antonio, Denver, Boston, Milwaukee, Atlanta, Baltimore, Minneapolis, San Diego and Indianapolis. And National Convention has not always taken place in a convention-hall setting. Twice, cruise ships have hosted conventions, and the Annual Meeting was once held on a moving train! On that occasion, Annual Meeting participants joined together in the first car and a runner traveled back and forth through the other cars providing updates. Later, folks from the first car then formed a conga line and danced back through the other cars to indicate the meeting had concluded.

Fun is always part of SCCA gatherings, and Convention is no different. This year’s afterhours activities include a group karting session, Pinewood Derby, bowling, an autocross Sunday at Las Vegas Motor Speedway, and it’s likely some people will find time to hit the casino floor, too.

As for attendees in 2020, more than 450 guests will be part of this year’s convention. More than 70 of SCCA’s 115 regions are represented, with New England Region and Detroit Region having the most attendees with 16 apiece.