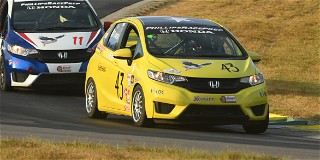 Opening laps saw a handful of drivers jostling to secure a spot in the lead pack. Schwartz fell back while Tony Roma, of Beverly Hills, Michigan, moved to the front on lap one followed by John Phillips, of Sealy, Texas; David Daughtery, of China Grove, North Carolina; Brandon Vivian, of Milford, Michigan; and Justin Barbry, of Jamestown, North Carolina.

The second lap saw Phillips, in the No. 43 Hoosier/PRP/HPD//KTuner/G-Loc Honda Fit, move to the front with Daughtery, in the No. 11 Hoosier/G-Loc/KTuner/Zamp Honda Fit, right on his bumper. A few laps later it was Phillips and Daughtery, working together and drafting on track, who pulled away to gap the second group of Roma, Vivian, Barbry and Schwartz.

For the rest of the race, Phillips and Daughtery slowly pulled away, intent on deciding the championship amongst themselves. Meanwhile in the second group of cars contesting the third and final podium position, it was Schwartz who took point with Vivian and Roma in tow.

With only a couple laps left, the B-Spec race took a turn. Daughtery, who had been fighting the flu, had car troubles and fell off the pace after setting a new VIR lap record for B-Spec. Schwartz also had troubles and parked his car in the grass, leaving teammates Roma and Vivian deciding the final two podium positions.

But up front it was Phillips, driving the car he bought from Daughtery a month ago, who streaked beneath the checkered flag for victory. This was his first Runoffs National Championship in 29 attempts, setting a record for most Runoffs appearances before claiming a win. And with Sunday’s win, Phillips also claimed a Super Sweep title.

“David (Daughtery) came up behind me and got on my bumper and pushed me. It was our game plan all along. If we could hook up, we would hook up and run as hard as we could for as long as we could,” Phillips said, choking up during the post-race interview. “I love this sport. I love this community. I love coming to events and having fun. There are times in your life when you think you should be doing other things, but this is where my heart is. I ran every race I could all over the country to tone up to get here today. How many more years can I do it? I don’t know, but I’ve got it now.”

Roma, in the No. 55 Mr. Peel/Mobil1 Chevrolet Sonic, brought his car home in second, stating afterwards, “I had a pretty short Runoffs last year. I just wanted to come out and run clean this year. Brandon and I tucked in behind Frank (Schwartz) and worked together. Then sorted it out between ourselves the last few laps.”

Vivian, in the No. 25 Mobil 1/Charlie's Still on Main Chevrolet Sonic, rounded out the podium in third and said, “We knew we couldn’t catch John with the lap times he was running. We just weren’t going to run him down. So, I decided to pressure Frank as much as I could. My strategy was pressure, pressure, pressure and I finally got by and ended up third.”

Travis Washay, in the No. 30 Indian Summer Racing/United Motorsport Mini Cooper, brought his car home in fourth and earned the Sunoco Hard Charger award after starting 26th in the field. Barbry finished fifth.