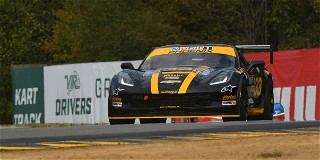 Kevin Allen, of Anderson, South Carolina, was alongside the No. 33 Phoenix Performance/Hoosier/Hawk Chevrolet Corvette of Aquilante as the thundering field made its way to the green flag. Allen had his No. 64 FGR/Hoosier/Rebello/Mallen Alley Nissan 300ZX Z32 revved up and ready to go, hoping to eclipse Aquilante at the start. The racket of Allen’s car broke Aquilante’s concentration for a moment and forced an error that hindered a perfect start. But alas, Allen’s efforts weren’t quite enough as Aquilante managed to assume the lead by Turn Two and hauled off to a 10-second victory and his fourth GT-2 National Championship, setting a new GT-2 lap record along the way.

The victory signified the successful completion of a stressful project for Aquilante. His winning car was actually configured for Touring 1 competition earlier in the year. But only four months ago, Aquilante decided to rebuild the car for GT-2 competition. Even with putting in 16-hour workdays, the build ran late, and the Corvette didn’t even make it out of the paint shop until August.

“This was quite the long summer project. At one point I got a little nervous it wasn’t going to come together. So, I just wanted to put this race away,” Aquilante said about mercilessly pounding away from the competition.

Behind Aquilante, Allen found himself unchallenged for the runner-up spot during most of the race. But on the last lap, his car faltered and barely made it to the finish line. In fact, the car didn’t even complete its full cooldown lap.

“This car is exceptionally high strung and loves to break parts,” Allen said after the race. “We went as quick as we could go for 15 laps. We apparently have now killed two engines this week. But the car is just a blast to drive. It’s a riot.”

Much like Allen, Mark Boden and his No. 46 Fall-Line/Tropical Passage Porsche 991.1 GT3 Cup car found themselves sitting in third, unchallenged for nearly the entire race. But with slick track conditions, Boden had to stay focused to keep his racecar on the circuit.

“It was nasty out there,” said Boden, of Winnetka, Illinois. “I was hanging on for dear life. It was a tough race. It was exciting every lap.”

On the first lap of the race, the No. 69 Summit Racing/ECC/DEI/QrtMaster Chevrolet Camaro of Aaron Quine had a bit of a run-in with Tim Kezman in the No. 44 Fall-Line/Lemons of Love Porsche 991.1 GT3 Cup car, taking two top-five starters out of the hunt. Pete Peterson, in the No. 98 Toyota/Valvoline/Hoosier Toyota Celica, filled the breach and cruised home to a fourth-place finish. Randy Kinsland, in the No. 85 RF Engines/MXA Motorsports Chevrolet Corvette, came home fifth. And Tom Stanford, in the No. 20 Pote-Stanford Pitty's Chevrolet Camaro, earned the Sunoco Hard Charger award after starting 24th and finishing in the 15th position.