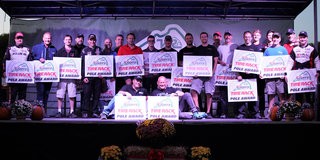 ALTON, Va. (Oct. 10, 2019) -- Three days of qualifying concluded Thursday evening at the 2019 SCCA® National Championship Runoffs®. There are now 28 Tire Rack Pole Award winners who will lead their respective classes to the green flag over the next three days as nearly 600 competitors do their very best to earn a win on the beautiful 18-turn, 3.27-mile circuit at VIRginia International Raceway. Tire Rack Pole Award winners each receive a commemorative sign and lapel pin, a certificate of achievement, and $500 to spend at Tire Rack.

With nearly 55 entries, Spec Racer Ford Gen3 (SRF3) is one of the two largest race classes this year at the SCCA National Championship Runoffs. Charles Russell Turner, in the No. 23 Southeast Spec Racer/PCS SRF3, held the top qualifying time for the first two days. But then Brian Schofield, in the No. 61 CFR PM Racing SRF3, got going Thursday and claimed the Tire Rack Pole Award by .172-second over the No. 31 Angry Llama/Comprent SRF3 of Robeson Clay Russell who was involved in an on-track incident Wednesday.

The largest field of this year’s 56th annual Runoffs is Spec Miata (SM) with 60 entries. Todd Buras, in the No. 56 Hoosier/East Street/KKD Mazda Miata, set a time on Tuesday that nobody could beat the rest of the week, making him the Tire Rack Pole Award winner for the class. But Buras grabbed the top spot by only .061-second over the No. 42 Danus Utilities/East Street Racing Mazda Miata of Preston Pardus, and the top seven qualifiers all turned laps in the 2:14 range. So, the SM race Saturday will likely be a hotly contested event.

Production Cars
Production classes generated some dominate performances over three days of qualifying. Jesse Prather, in the No. 34 JPM/Hoosier/Carbotech BMW Z3, set the fastest time over three days on his way to the E Production Tire Rack Pole Award. And in F Production, the No. 7 MaxtonsFight.org/JPM/Hoosier Mazda Miata of Eric Prill set a fast lap Tuesday that nobody could beat the rest of the week, so he claims his fourth Tire Rack Pole Award in the class.

In H Production, Vesa Silegren’s No. 68 Hoosier/svtek.com/KONI/Carbotech Honda CRX was the fastest car after two days of qualifying. But by Thursday afternoon it was Steve Sargis, in the No. 8 Carbotech Triumph Spitfire, who eclipsed Silegren and claimed his second Tire Rack Pole Award in the class.

B-Spec kept things interesting during qualifying with the No. 43 Hoosier/PRP/HPD//KTuner/G-Loc Honda Fit of John Phillips claiming the top spot Tuesday, but was unseated Wednesday by the No. 03 RP Performance Mini Cooper of Alex Ratcliffe. Then on Thursday it was Frank Schwartz in the No. 24 AACS/Race Track Maps/MINI USA Mini Cooper who claimed the Tire Rack Pole Award. However, the top four qualifiers are separated by only six-tenths of a second.

A fantastic fight also developed in American Sedan over three days. Gregory Eaton, in the No. 28 Eaton Racing and Development Ford Mustang, had the fastest lap to open qualifying. On Wednesday, Daniel Richardson and his No. 15 Hoosier/GentiumTech/AutoGear/ProSys Chevrolet Camaro turned a better lap. But Thursday saw Eaton come back with a vengeance and put down a lap that earned him the Tire Rack Pole Award, his first in the class.

The GT-3 Runoffs race takes on special significance this year as it is also the final event in the new GT-3 Challenge presented by MPI, a series supported by Mazda, Max Papis Innovations, Penske Racing Shocks, AiM Sports and Hoosier Racing Tire. Drivers Jeff Dernehl, in the No. 71 Roswell Outback Auto/Hoosier/RRE Mazda RX-7; Stacy Wilson, in the No. 47 Hoosier/Mazda/Wilson Racing Mazda RX-7; and Rob Warkocki, in the No. 78 Hoosier/Mazda/TRO Mazda RX-7 are the three finalists in the running for the GT-3 Challenge Championship. However, it will be Michael Lewis and his No. 32 Goodyear Mazda RX-7 who leads the GT-3 field at the start since he claimed this year’s Tire Rack Pole Award, his sixth in the class.

Touring Cars
In Touring 3, defending National Champion Marshall Mast set the pace over three days on his way to the Tire Rack Pole in his No. 31 Phoenix Performance/Hawk/Hoosier Ford Mustang GT. The Touring 4 (T4) class was much closer as the No.186 Flatout Motorsports Subaru BRZ of Nick Leverone held the top spot on Tuesday. But then it was T4 defending Runoffs Champion John Heinricy, in the No. 35 Hoosier/Mobil1/Hawk Toyota 86, who came to the front and took the Tire Rack Pole Award. The top seven qualifiers in T4 all posted lap times in the 2:11 zone, however, so that could be a very tight race come Friday morning.

Elivan Goulart and his Lotus Exige had the fastest time after Tuesday’s qualifying in Super Touring Under. But defending class champion Kevin Boehm poured it on Wednesday and Thursday to claim the Tire Rack Pole award in his No. 90 HPD/Carbotech/Red Line Oil Honda Civic by more than a second. Then in Super Touring Lite, Danny Steyn and his No. 9 Nelson/OPM/G-Loc Brakes Mazda MX-5 set a time Tuesday that nobody could best the following two days and earned his second consecutive Tire Rack Pole Award in the class.

Prototype Cars
Robert Iversen, in the No. 4 Ten Crow BBQ Ligier JS 49 Honda, was in control of Prototype 2 all three days and took the pole. But don’t let that fact fool you. The class is close as the top five qualifiers all turned laps in the 1:49 range. And in Prototype 1, Todd Slusher grabbed his second Tire Rack Pole Award in the No. 62 Hempsun Farms Elan DP02 Mazda after holding the top position all week.