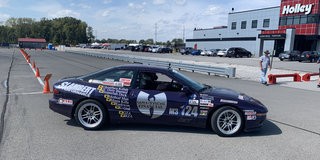 “We’re out here to have fun,” Cody Willet says, though it’s obvious on the first pass by their garage area.

Willet’s Ford Probe – originally his high school car, now the track car for Willett and Stephen Lee – has a unique history. The “Wu-Tang Financial” logo and apparent sponsorship is a reference to an old Chappell Show bit from Comedy Central (editor’s note: the bit is available on YouTube, but if you know the show, you’re already laughing. If you don’t know the show, you probably shouldn’t search for it, and you definitely shouldn’t search for it at work or with children present). Admittedly the only significance for the faux sponsorship is the comedy and, according to Willett, “what happens when people that shouldn’t get access to a vinyl cutter.”

But the story of the Ford Probe, nicknamed “Cold Lotion”, is the spirit of Tire Rack Time Trials Nationals.

The car was Willet’s high school ride and had fallen on some difficult times. An engine swap, done almost correctly, left it a cylinder down but the perfect car to bring to NCM Motorsports Park’s King of the Heap, where any car can be claimed for $500. There was no way, in its current condition, that anyone wanted to take on that ride, and the team of sim racers had a great time.

Fast forward a few months: some of the mechanical issues had been sorted out, and the Probe was starting to come alive. It was no longer worth it to enter in the claiming race, so track days and time trials it was.

It’s still mostly stock, with only a few improvements. Except now, it’s fast enough to have fun and inexpensive enough to bring out at every opportunity.

“We added a cage and probably quadrupled the amount of money we have into it, except for tires,” co-driver Stephen Lee said.

And just in case you’re wondering, they do recommend a Hans Device to protect ya neck.

The Tire Rack Time Trials Nationals Powered By Hagerty took another big step in 2019, growing to 194 cars in just the second year of the program.

A lot of that comes from the welcome that NCM Motorsports Park rolled out for each and every competitor and the SCCA. The track staff and their excitement for the event is a big part of the event’s vibe. And the pavement is both challenging and fun.

“This is a difficult track, just from the consideration that it’s got a nice combination of technical, blind corners and really fast corners,” Mitch Wright, General Manager of NCM Motorsports Park, said. “The track’s a lot faster than people think it is. It adds that element for a championship event that you might not get at other places. I think this is the perfect venue.”

With a 10-year agreement for the event in place, the location wasn’t taken lightly.

“We’re really happy to have it,” Wright said. “It’s fun to see the paddock full and the variety of vehicles that are here. We’ve looked forward to it since the very first one that we hosted. A lot of the guys that work here all want to participate, so that adds to the fun. I’m a little jealous because I don’t have a car this year!”