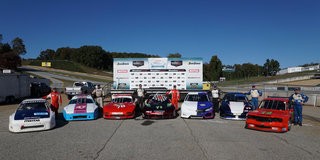 Mazda treated the GT3 Challenge competitors like kings. Those who were present Thursday night were taken out to eat at a local steakhouse. The Mazda hospitality was in full effect as they provided hamburgers and hot dogs for the crew members and even fed the drivers steaks one day!

The Mazda presence in the race was strong as well with a field that included five Mazdas, two Volvos, a Ford and a Honda.

From the green flag, polesitter Jeff Dernehl led the field in his RX7 and never looked back. Jeff knows Road Atlanta like the back of his hand and it showed. Add the fact that the car is immaculately prepared by Barry Trivette and this makes his team all but unstoppable. He was able to win Sunday's GT3 Challenge event along with the ARRC race on Saturday. Stacy Wilson, who claimed second place, is no stranger to Road Atlanta as well and is always a formidable competitor.

Richard Grupp's 3rd place finish was the talk of the paddock. Grupp, driving Gordon Ziade's RX3, was hit hard in the rear on Road Atlanta's straight by a GTA car in Friday morning's rain session. Everyone thought the car was finished for the weekend. The hit crushed the rear frame work and fuel cell and even bent the driveshaft. The team took the car back to Grupp's shop, worked all night and then some.  They arrived back at the track on Saturday with the car showing bruises but looking much better than it did on Friday. Obviously, the team worked miracles as Richard, who had never driven the car before, took it from the back of the field to third in the race.

Grupp was followed by Paul Young in his Ford Probe, Frank Marcum in his beautiful Volvo P1800, Rob Warkocki in his RX7, Sam Moore in his Volvo 142, John Mills in a RX7 and Joe Kristensen, whose new Honda Civic was fast but experienced a Throttle Position Sensor failure.

Max Papis Innovations awarded the podium some amazingly cool trophies! Their interest in the GT3 Challenge primarily stems from wanting to give back to the racing community. However, the podium finishers were not the only winners. John Mills came away with a set of Hoosier tires. AiM Sports bolstered the support to the club racers by providing product; Sam Moore went home with a new SmartyCam and Stacy Wilson has an AiM Solo 2 DL.

Tom Long, who has driven everything from Spec Miata to Mazda’s RT-24P Prototypes, was on hand to coach a GT3 competitor. He even drove one of the sessions in a GT3 car.  He came away impressed with the cars and the racing.

“The SCCA GT3 class platform is absolutely terrific,” Long says. “The cars are exhilarating to drive – fast paced, lightweight, balanced and make all the right sounds. Certainly, all the elements to a real race car! With all the adjustability the rules have to offer, the class is perfect for someone who enjoys playing with cars and tinkering to go faster. There’s plenty of adjustment for fine tuning, and the driving experience makes it all the more rewarding. While I was coaching in the paddock, the sense of camaraderie is unlike most other classes, where the willingness to help out a fellow competitor is unparalleled. Truly a cohesive group of racers.”

“The excitement that is building from within the racing community is more than we hoped for,” says David Cook, business development manager for Mazda Motorsports. “When top racers such as Rob Warkocki from Illinois, Stacy Wilson from Tennessee, and John Mills from Ohio make the journey to Road Atlanta, you know you’ve got something good. John even purchased a GT3 car just to compete at this event. Paul Young, Sam Moore and Joe Kristensen also joined in. Richard Grupp came out and demonstrated he can wheel his beautiful RX-3. Jeff Dernehl, though, brought the total package. When you tether his talent behind the wheel, the prep of his car with help from his crew chief Barry, and his experience at the track, he put on a special show. GT3 Challenge is only going to build from here.”

All in all, the inaugural GT3 event was an event to remember.  Good racing, good times and good friends. GT3 competitors are now looking forward to the next GT3 Challenge event. It will take place during the 2019 Hoosier SCCA Super Tour at VIRginia International Raceway on April 12-14.