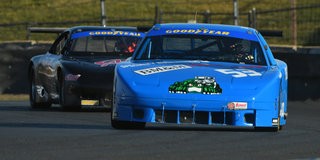 Jackson, of Langley, British Columbia, started second in the No. 53 Specialty Engineering/Goodyear Nissan 240-SX, qualifying just 0.135 seconds behind Michael Lewis. What shaped up to be a close competition between two very familiar and experienced adversaries didn’t disappoint. Jackson wasted no time getting to the front by passing polesitter Lewis in Turn 2 on the first lap. In doing so, he also earned the Sunoco Hard Charger award.

“We were good in different areas. I was really good going down the hill, but Lewis was really good in the brake zones,” explains Jackson. My car was set up on the edge and it was hard keeping it on the bubble.”

Jackson led the whole race, but it wasn’t an easy victory. Lewis hounded him for the entirety of the contest, at times just a car length or two behind. Jackson responded when challenged, gapping Lewis seemingly at will. Tires were going off by the last lap when Jackson broke traction under power, giving Lewis an opportunity. Lewis pushed Jackson hard all the way to the checkered flag, finishing just 0.052 seconds behind in a photo finish.

“I knew that it was a good car and that we’d be strong, but I hadn’t driven one for about 20 years,” said Lewis. “I took a guess at what was the best thing to do and it turns out I probably left a little too much at the end.”

After a DNF in GT-Lite, Taz Harvey and his No. 88 Dublin Mazda/Hoosier Mazda RX-7 took home third in a redemption race. He was unable to match the pace of Jackson and Lewis, but drove a clean race unchallenged from behind while fourth place was contested throughout most of the race.

“It was a lot of competition, and that's what we come here for. It was a lot of fun, and I can't wait until next year in Virginia,” Harvey said. “It was a heartbreaker in the GTL race, especially for the crew because those guys do so much for me. This will keep them going through the winter, I think. It was great.”