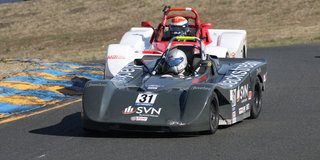 SONOMA, California (October 21, 2018) – Clay Russell made a 2,666-mile tow from his home in Spartanburg, South Carolina, to the SCCA National Championship Runoffs®  at Sonoma Raceway. The drive home will be much, much easier with the Spec Racer Ford Gen3 winner’s trophy in the passenger’s seat.

Russell’s No. 31 Angry Llama/SVN/Comprent Motorsports Spec Racer Ford and Mike Miserendino’s No. 11 MBI Racing machine trailed the Trans Am 455 Super Duty, the Official Pace Car of the SCCA Runoffs, to the green flag before Miserendino immediately streamlined to the lead. Sliding away, the pair became the story of the race up front. When John Black spun his No. 17 machine on lap five, the national championship was all but down to just two true contenders.

The pair swapped the lead four official times at the stripe and several more unofficially during the 20-lap, caution-free race, weaving through traffic and setting up a final lap showdown. With Russell in the lead, both drivers were anticipating a move in one of two key passing zones on the 12-turn, 2.52-mile circuit – either Turn 7 or the final hairpin of Turn 12. Russell held off Miserendino in the first zone, leaving the five-time champion one last run down the hill.

Russell positioned his car cleanly, defensively and perfectly, leaving Miserendino with no choice but to brake late. The challenger locked up his tires and was forced to abort the attempt with just the slightest bit of inadvertent contact. With Miserendino crossed up, Russell drove the final few hundred yards to his first Runoffs podium and National Championship.

“Since Thursday, I’ve spent 24 hours a day trying to figure out to start on the inside or outside, and I chose wrong,” Russell said. “Mike took the lead right away, but the plan was really to put down some consistent lap times and drive smooth and I didn’t listen to myself.

“There was one point that (Miserendino) was in front of me going into Turn 10 and I dropped the left side of my car into the dirt and, honestly, I thought I was going to spin out. But I kept in it and drove through it.”

Russell became the first driver of the weekend to claim the SCCA Super Sweep award, which requires a Majors Conference Championship, Hoosier Super Tour point title, and a Runoffs win – all in the same class.

For the veteran Miserendino, a standard bearer in the class, the podium finish was the 10th of his career.

“Clay tore it up this year, and he’s been coming on strong,” Miserendino said. “It’s the Runoffs, people always rise to the occasion. I had a great week. You always want to win, always want to sit on the pole, and lead all the laps. But here I am, another podium, and that’s cool. It was an incredible race, and I’m happy for him.

“In Turn 11, I thought ‘well, I better try.’ As I was going in there, it was either take him out or do what I did (and spin). I was never going to take him out, that’s not the way I roll. We rubbed a little bit, but that’s racing to me. He came out on top.”

Battling just as hard about three seconds behind the leaders were three cars hoping to fill the podium. Bobby Sak, TJ Acker, and Scott Rettich were left to sort out the podium finish and, identical to the leaders, Rettich’s No. 8 Alliance Autosport/Red Line Oil machine found himself with one last corner to sneak by Sak.

“The car was ok, and I settled into fifth place for a while,” Sak said. “John Black spun in some liquid, and TJ (Acker) had to really check up and I was just able to shoot the gap between them. Scott Rettich was able to do the same thing. It was a really tough battle with Scott and TJ.

“I’m really happy with the podium. This is my worst finish of the year. Thirteen races, nine wins, three seconds and now this third. So it was a great season.”

Acker’s No. 62 MBI Racing Spec Racer Ford, locked in that battle with Sak and Rettich, finished fourth, while Rettich recovered for a fifth-place finish. Vince Balch improved eight places from the green flag to finish 18th and earn the Sunoco Hard Charger in the No. 72 Balch Garage Spec Racer.

Image: Russell and Miserendino were nose to tail for most of the race.
Credit: Zoompics.com/SCCA