Boehm Cruises to Win Ahead of Ferocious Battles in STU 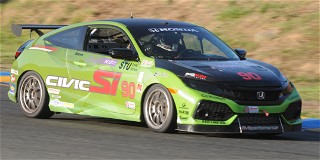 The win was the third-career Runoffs victory for Boehm, who escaped with a dominating 49.757-second margin of victory.

“After we got out of turn two I just put my head down and tried to hit my marks,” Boehm said. “It’s great to be able to make this car come out and show what it’s capable of.”

Ian Barberi, from Pleasanton, CA, jumped from sixth place to second in the No. 174 TC Design Motorsports BMW M3 during the second-corner incident on the start and held down the second spot and captured the Sunoco Hard Charger Award.

“I got lucky on that start,” Barberi said, “I was on the inside and was able to skate by.”

After making a pass for second, Barberi tried a tire-saving strategy to hopefully be able to challenge Boehm at the end, but couldn’t close the gap.

Third place was captured by the No. 71 MarcoPolo Motorsports/Muellerized Lotus Exige S  driven by Nicolai Elghanayan of Santa Ana, CA who had a ferocious battle with Kevin Koelemeyer of Fort Myers, FL driving the No. 111 OPM/HPD/G-Loc/Hoosier Honda Civic.

On the first lap, front-row starter Nathan Pope charged up the hill and his Honda Prelude had a long slide into turn two before getting to the site of the spin. Elghanayan narrowly missed the spinning car and Franklin Church did not, the incident scrambling and separating much of the field almost before the race had begun.

As Boehm checked out and Barberi gave chase, all eyes were on the battle for third between Elghanayan and Koelemeyer – two drivers who didn’t know each other’s names before they climbed from their cars and shared a hug in celebration of their battle.

Elghanayan got around Koelemeyer early, but made a mistake and slid off, giving the position back. Having already shown his hand, getting back by would be a race for the ages.

“I can’t thank Kevin enough for being a clean racer,”Elghanayan said.  “He and I were wheel to wheel and toe to toe for the majority of the race and it was an amazing race,”

Koelemeyer tried to defend but couldn’t keep him at bay.

“It was as wide as I could absolutely make it,” Koelemeyer said eluding to making his car too wide to pass, “Nicoli was the better driver.”

Elghanayan was able to get by for the final podium spot with just a couple of laps to go.

“I saw he was taking the right-hand turn into the Esses really tight to make sure I didn’t get him on the inside, so I was faking him every time,” Elghanayan said, “Finally I went on the outside and I got him.”

Image: Kevin Boehm on the way to his first STU and third total National Championship at the wheel of the HPD/Acuitiy Instruments/Carbotech Honda Civic.