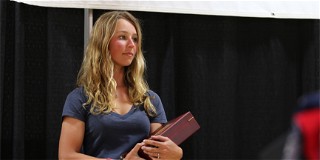 TOPEKA, Kan. (Sept. 10, 2018) -- The 2018 Tire Rack SCCA® Solo® Nationals concluded festivities last Friday with the traditional end-of-week banquet. The ceremony heralded a second set of Solo champions, with the first set being lauded earlier in the week on Wednesday. Beyond recognizing this year’s champions, some additional honors were handed out during the closing ceremony.

For the second straight year, New England Region’s Tamra Hunt received the Rothney-Kozlak Cup. This award is named in honor of Lynne Rothney-Kozlak for her leap of faith into Open Class competition at the 1994 SCCA Solo National Championships, as well as decades of sustained competition in Open Classes and mentoring other women to advance their driving skills by competing against top Solo drivers.

A Chairmen’s Award for Sportsmanship went to James and Marcy McDaniel, of the Kentucky Region, for their Safety work at Solo Nationals while never making a single competition run during the event. An additional Chairmen’s Award for Sportsmanship was given to PJ Corrales, of the New England Region, for self-reporting a cone he hit during E Street Prepared class competition. The Chairmen’s Hard Luck award went to Street Touring Xtreme driver Steve McLaughlin of the SCCA’s Reno Region.

The week of awards actually began with ProSolo® Open Category Year End Challenge winner Mike King, of the Buccaneer Region, receiving the JCJ Cup. And the Fletcher Cup again this year went to Jordan Towns, of the Alabama Region, as the Ladies Category Year End Challenge Champion. That award is named in honor of Marchel Fletcher, the originator and primary advocate for a Ladies Class in ProSolo.

On Wednesday night, a couple Club members also received special Club honors. The Solo Cup was awarded to Steve Hudson of SCCA’s Lone Star Region. The Solo Cup is presented to Sports Car Club of America® members who have made an outstanding contribution to the Solo events program. Winners are selected by the Solo Events Board from nominations submitted by the membership at large. Hudson has served as a Solo Events Board (SEB) member, SEB Chair, Chair of the Junior Driver Program revisions committee, and is a longtime contributor to the sport at both the local and national level.

The 2018 Driver of Eminence is Tom Ellam from SCCA’s San Francisco Region. The Solo driver who has consistently demonstrated excellence behind the wheel, and an exemplary degree of sportsmanship, dedication and unselfishness receives this honor. The winner is selected by the Solo Events Board from nominations submitted by the membership at large. Ellam is a championship-winning driver and car builder who has given tirelessly to help others with their cars or driving talents.

The Johnson Spirit of the Sport Award was presented to “The Eh Team,” a group of competitors from eastern Canada. This recognition goes to Solo community members who bring the spirit of fun to their fellow participants, as symbolized by the message engraved on the perpetual award: "Johnson Spirit of the Sport Award, presented annually by the Royal Order of the Sheep to a member of the flock that upholds the spirited virtues of Fun, Camaraderie and Tomfoolery.” This award is named in honor of the inaugural recipient, the Exalted Grand Shepherd, Roger E. Johnson. The award is selected annually by the previous three recipients.

And finally, the Dick Berger Perseverance Award went to Bob Barone from the New England Region. The award recognizes someone each year who is undaunted by limited success over many National Championship events, but keeps coming back to enjoy the camaraderie, community, and hopes for a trophy in competition. Barone, who competes in the A Modified class, has come to Nationals 32 times with only one trophy.