SCCA RallyCrossers -- Will Work for Fun 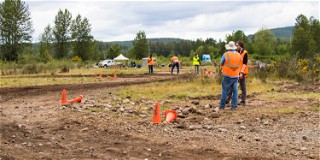 SCCA® RallyCross® brings people together for the thrills of competition, but that’s only part of the fun. Between racing sessions, RallyCross participants are required to “work.” That term, however, is used very loosely.

RallyCross operates in what is referred to as a “run-work” format, similar to that used by the SCCA Solo program. A day of RallyCross is split in two with half the day devoted to racing and half to work. Providing this labor is what makes RallyCross self-supported and means organizers don’t have to hire course marshals. This is what keeps RallyCross affordable. Because most of the work is performed on the race course and in groups, it also provides several other benefits.

Working out on course is when you experience a significant social aspect of the sport. You’ll find yourself working with like-minded people that live life to the fullest. After all, this is how they got into racing. While people say opposites attract, you’ll find the racing mindset makes for fast friendships that last a lifetime.

You’ll be working alongside competitors, many of which are seasoned RallyCross racers. This is your chance to ask them racing questions and learn from their experience and wisdom. You’ll find that your new co-workers are typically very forthcoming with knowledgeable and helpful answers.

This is also your opportunity to learn from other competitors as you watch them race. Racing techniques can be absorbed simply by copying what other drivers do. Not only will you see lines you didn’t notice during course inspection or while driving, you’ll see different approaches to turning, braking and accelerating. Take what makes sense to you and incorporate it into your own driving. Free racing lessons are hard to turn down.

Along with seeing different driving techniques, you’ll also see cars and vehicle modifications that may interest you. Just as importantly, you’ll get to see how they perform firsthand. Maybe the grip of a particular set of tires will catch your eye. You might hear an exhaust system that makes music to your ears. One car’s drivetrain or balance might make its way onto your wish list. The possibilities are endless.

While you’ll have the best seat in the house to watch, there is some actual work to do. Mostly you’ll be monitoring cones. This involves radioing in car numbers when cones are knocked down and then standing them back up again. There are other responsibilities, such as keeping the course free of debris and large rocks, as well as being ready to wave the occasional red flag. Other tasks include monitoring timing, the starting line and spectators.

As with all forms of racing, the first concern is the safety of everybody involved. While it’s a good idea to ask a veteran about safety and your responsibilities while working, make sure you pay attention to the organizers during drivers’ meetings. This is where they will go over the day’s tasks and expectations while you are working out on course.

Go on out and give RallyCross a try.  It’s the most fun you’ll have at work!

Words and photo by Greggar Helgeland