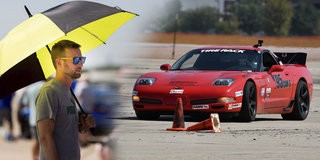 Our subject for the latest installment of Take 5 is Stephen Lee.  He lives in Elizabethtown, KY, competes with the SCCA Kentucky Region, and has been autocrossing for 17 years.  He was also your 2017 Solo Nationals CAM S Champion!

JH: Hello, Mr. Lee!  Why don’t we start off with what you do for a living?  And how did you come to be in that field?

SL:  I currently build and repair industrial gearboxes and industrial motors for Sumitomo Drive Technologies. As to how I came into that job, I attended a local tech school for their automotive program, where I became an ASE master tech. After school, I worked in the automotive field for a while. I started at a Mazda dealership, but pretty quickly made the jump to the auto parts world, where I was the store manager for Advance Auto Parts for around 11 years. It was after a local event, where 2016 CAM S Champion Shawn Lambert and I were having dinner, that I mentioned I was thinking of looking for a different job.  He mentioned that they were hiring, and I have been there ever since!

JH: How did you first start autocrossing? What brought you into the sport?

SL: In 1997, I was hurt pretty badly in a car wreck. I was the passenger in a single car accident where the car left the road and struck a tree with the passenger door. It shattered my hip, broke my jaw, and various internal injuries. I spent several months in a wheelchair. One of my docs at the rehab hospital was Dean Smith, who later introduced me to autocross in 2001 at Fort Knox in his 1993 MR2 turbo. He took me for one ride, and I was instantly hooked.  I ended up buying a 1998 Integra GSR shortly thereafter on Dean’s recommendation. For a while I also ran a 1989 240SX coupe with an SR20 swap. In 2007, I started taking autocross a little more seriously, and ended up buying a Honda S2000 after driving Dean’s. I was totally blown away by how good it was right out of the box. I ran that car up until last summer, when I sold it to Heyward Wagner.

JH: So, you sold the S2K and bought a Toyota MR2 Spyder. Is that the car of the future for you?

SL: I bought the ES Spyder right before Nationals last year, with the intent to compete with it going forward. It is a very competitive car for the class, and that class looked like a lot of fun.  However, I drove Eric Brown’s C5 Z06 in CAM S at Nationals last year.  And after coming back home and driving the Spyder, I found I had been totally spoiled by all the power in the Corvette. When you drive something as quick and as potent as that Corvette, it is kind of hard to go back to something that is a little… slower.  I was hoping that was a bug that would wear off after a month or two, but it’s still here almost a year later. So, the Spyder will be going away, as I am in the process of picking up a STU prepped Corvette.

JH: We actually met racing in a Grassroots Motorsport Gran Turismo league.  I, along with a few other people, have found that virtual racing is a great way to stay sharp in the off season. What is it about virtual racing that you think helps you as an autocrosser?

SL: The biggest thing for me is that, in Gran Turismo for example, you can swap out cars in about two minutes, if you want.  So, I started driving all sorts of cars and I found that having to adapt to all the different types of cars in the game helped me do the same thing in the real world.  It’s possible to experience such a wide array of cars in the game, in such a short amount of time, that it really helps you figure the cars out quicker.  And that has helped me learn to adapt to what the car is giving me, versus fighting it in the real world.

JH: I know you have done a lot of different types of motorsports.  You have done some road racing, time trials, and so forth.  There is the thought out there that once someone spends time on the track, they will no longer want to race in parking lots. What is it about autocross that keeps you coming back?

SL: The big thing is the style of competition.  With autocross, you only get a handful of runs to get it done. I enjoy that kind of pressure.  It’s up to you to walk the course, figure it out, and put it all together in three runs.  You have to be more than just an excellent driver.  You have to be mentally prepared to figure out the course, and put down your best within three runs.  There aren’t a lot of motorsports where that is the case.  It’s like qualifying, but without all the practice driving the course.  I love that extra element that autocross possesses.