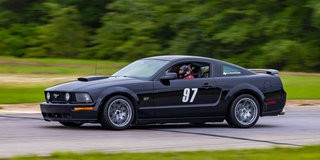 (Editor’s Note: The following article was written by Dave Hardy, an autocrosser for nearly 20 years)

Short Version: The new SCCA Time Trials concept is awesome.  It has the fun, competition, accessibility, and camaraderie of National level autocross coupled with the adrenaline of high-speed tracking.  You should do it.

Long Version: So, a bit about me first.  I’ve been autocrossing for 20 years give or take, I’ve served my local region in various capacities, and I spent about 5 of those years on the SEB.  I’ve done more regional and national autocrosses than I can count, and I’ve made the trip to Nationals I think 8 times.  I’ve also done a fair bit of endurance road racing with other organizations, and even did an SCCA Time Trial several years ago in a borrowed car on the heels of winning a poetry contest.  Yes, really.

But, I had never tracked my own car in competition, and with the exception of a couple of informally organized track days early in my motorsports days, I had not taken my own car on track.  In general, I’ve been a strict adherent to the tenet that “Thou shalt not track thy daily driver,” and since I don’t have room in my life for a dedicated track car, that meant no track time for Dave.

That changed this weekend.

With the announcement a few months ago of the TT Nationals program, the gears started turning.  This was a place where I could put a car on track, that would still serve me well as a street car.  I wouldn’t have to go through all of the prep that ruins a car for the street in order to put it on track, in competition.  And that part – competition – was part of what changed the math for me.  While “Thou shalt not track thy daily driver” was easy to adhere to in the context of non-competition events, this seemed like something that would allow me to capture what I love about autocross (competition and accessibility), but do it on track.  The final straw was when the announcement came out that Hagerty would be offering track insurance for the event, on the strength of the good relationship established with Track Night in America Driven by Tire Rack.  One very reasonable quote later and it was settled.  I was in.

Preparing for the event was mostly in line with what I do for an out-of-town autocross trip.  Make sure the fluids are in good shape, throw on the 200 treadwear tires, set the camber to “all,” and bolt the race seat in.  The exception for this being that I did up my game in the braking department.  I knew that my Mustang would generate a fair bit of velocity, and I also knew that I’d have to scrub that velocity several times per lap, with nearly two tons of mass times velocity squared arguing the contrary.  So I did upgrade to the larger original equipment rotors from a newer model Mustang, I swapped to some intermediate brake pads that had a good reputation for being decent both on the street and on track, and I fabricated some cooling ducts for the front brakes as well.  With that prep completed, I loaded up the trailer, the cooler, and the family, and set my sights on Carolina Motorsports Park for the Memorial Monster/TT Nationals Primer.

I showed up at close to 10 p.m. on Friday to unload, and much to my surprise the party was still going strong.  This was not the after-dark paddock I had come to expect at other Club events.  Interesting.  I dropped the car and the trailer, grabbed a beer, and engaged in some bench racing for the next couple of hours.  Somewhere around midnight, good sense took over and we retired for the night, as it was less than seven hours until registration opened in the morning.

Arriving early the next morning, registration was quick and easy.  I finished setting my compound up for the weekend, zip-tied a rented transponder to my front bumper, and then headed to the drivers’ meeting.  If the previous night set the tone for the off-track activities, then the drivers’ meeting set the tone for the on-track.  Event Chief Heyward Wagner went through expectations that included the idea that “We are all in this together – this event doesn’t succeed unless the competitors and the administrators are all pushing in the same direction,” and the best description I’ve ever heard of the passing flag – “If you see this flag, it means you are messing up someone else’s experience.”  I have never heard that explained so succinctly and well.  This was about having fun, being safe, and making sure that everyone on track with us was doing the same.  We’re all adults, let’s act like it.  It was a refreshing approach.

Then we hit the track.  Something interesting in the structure was that while cars are classed based on prep level, drivers are grouped based on experience.  In my case, that was my STP/CAM-C prepped Mustang slotting nicely into the Touring 2 Class, while I was grouped Intermediate Plus (‘intermediate’ being that I had some track experience but not enough to be an advanced time trialer, ‘plus’ being that I was in a car on the quicker end of the spectrum).  So, when the Intermediate Plus group was called to grid, I took one last guess at starting tire pressures, and proceeded to grid.  Saturday morning had three sessions for each group.  In the first, I just wrapped my head around being on track, making sure I was watching my mirrors well, trying to learn the corners, and just feeling out the car a little.  It was the first time the car was stretching its legs to that extent, so I wanted to approach limits with caution.  The second and third sessions had me finding more speed, hitting my marks a bit more aggressively, making sure that the brake upgrades were earning their keep, etc.  By the end of the last session, I had spent nearly an hour on track and was getting confident in the car and my ability to flirt with the limits without getting ugly.

Saturday afternoon was the first Track Cross session, and the first time we would be putting times on the board that would count.  Now, going into the event, I wasn’t real sure what to make of the Track Cross.  Why not just use that time for more lapping?  Having done it, I have completely changed my tune.  It is such a cool element.  The Track Cross is, in short, an autocross run on a segment of the track.  Now, there were no traffic cones involved – it was the normal track features, but just a different execution.  We gridded up in pit lane, and the start line was pit exit.  And maybe it’s my autocross background coming out, but while I never really got the competition monster yelling in my ear too bad during the morning session, man he was there during the Track Cross.  Roll to the start line, the starter is there with the green flag inching you up to the line. He turns and confirms that you’ve got clear track in front of you and the green flag waves.  IT. IS. ON!  Whereas I was pretty tidy and timid during the morning session, the Track Cross made me feel comfortable and at home and ready to turn up the wick.  That it started in a feature that lent itself well to a first-gear, second-gear, third-gear drift was a bonus.  Roughly 47 seconds later, I passed through the finish lights and the juices were flowing.  A couple of additional runs confirmed that the hook was set deep and gave me chances to tidy up or mess up various elements, and then it was time for the Saturday night social.

Now, we’ve all heard the phrase “come for the cars, stay for the people.”  And it’s true.  The places my head goes to when I hear that phrase are the Friday night welcome party at the Dixie National Tour, and Wednesday night in Lincoln, Nebraska at the Tire Rack Solo Nationals.  Both have fond memories of good friends, good food, good stories, family fun, shenanigans, bench racing, and just generally SCCA people at their best.  And prior to this weekend, I had never had that experience at a racetrack.  I’ve heard plenty of stories about the glory days, but unfortunately my experience at the track is that shortly after the track goes quiet most folks go back to their toterhome or hit the local TGIChili’s on the way to the hotel, and by dusk the place is a ghost town.  But Saturday night at CMP was right up there with the best of SCCA nightlife.  Tim White was there with the Trash-a-rita, though fortunately not serving the “full Canadian” mix.  The grill was a hive of activity serving up nonstop pulled pork, grilled chicken, and corn on the cobb.  The coolers were cold and full of a healthy variety.  The kids were running around being kids, and the adults were hanging out with their car buddies, also being kids for just a little while.  In short, it earned it’s spot next to those Dixie Fridays and Lincoln Wednesdays.

Sunday morning met with the realization that we were back to full track sessions, but this time the timers were feeding a scoreboard.  Would the competitive itch that was awakened during the Track Cross be reflected in the timers during the full sessions?  Yes. Yes, they would.  Session 1 would see my time drop by a couple of seconds.  Session 2 would see another second carved out and the claim of “taking the kink flat” added to the bench-racing repertoire.  Session 3 would prove that when tires are done, they are done :)

More beer cans were relieved of their contents as the trailers got loaded and the calculations were made, and at the end of the day I walked away with a third-place trophy.  Certainly not my reason for going, but a nice memento nonetheless of a really great weekend.  A few more credits were given, a few more stories were told, and a few more hugs were shared, and then we all started our journeys back to the real world.