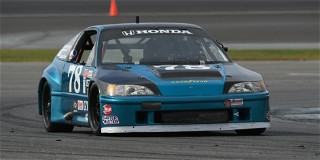 Bovis’s No. 78 Goodyear Tires/JDM Motorsports Honda CRX almost immediately left the field behind from the Tire Rack Pole, steadily growing the lead throughout the 19-lap race. At the finish, Bovis was 5.783 seconds ahead of Shadowen for the win.

“We watched a lot of the races and there’s really one good place to pass – at the end of the straightaway,” Bovis said. “You really have to lead coming out of Turn 1. We did everything we could, almost lost the car, got all sideways on the opening lap to make sure that we came out of there first.”

“The one thing I can say about the importance of this facility and this race is that I had my team, Jim Dentici and Bob Clark, working for two years to try to win today,” Bovis said. “For 40 minutes today, we put two year’s worth of work in. We always try to come with a really good program, as close to pro racing as we can get, but we’ve never worked this hard for a race.”

Shadowen ran the fastest time in the opening qualifying session on Monday, but was unable to run the No. 72 Road and Race Automotive Honda CRX on Thursday and Friday after breaking a drive shaft pulling off the grid. That Monday time held up for fourth on the grid, the same qualifying position as in 2016.

Slowed early as he worked his way around eventual seventh-place finisher Peter Zekert’s No. 45 Wiseco Pistons Nissan 200SX, Shadowen had no shot to run down a flying Bovis, and the 2016 class champion settled in for his fifth podium finish.

“We pulled off a really good lap time on Monday, before we caught up to traffic, and that was the time to beat early in the week,” Shadowen said. “On Wednesday, pulling off the grid, we broke a drive shaft. It’s a half hour fix, but unfortunately the part was in California. We didn’t get a part until Thursday afternoon after qualifying, and at that point we lost a few positions on the grid.

“The start was a little hectic. The car in front of me was smoking excessively, and I didn’t want to lift but I didn’t want to stay behind him and take a chance, either. I fell in behind Zekert, so we played the drafting game for a few laps. I finally had to go around him. At that point, Chris had gotten a little bit of a lead. I think if Chris and I had been a little closer, it would have been one hell of a race. But just to come in second at Indy, and be here and have done this, it was an honor.”

The battle for third ended up with two of the most decorated drivers in SCCA history, with Sargis’ No. 18 Hoosier/Carbotech Triumph Spitfire just quicker than nine-time champion Joe Huffaker’s No. 77 Huffaker Engineering/Hoosier MG Midget.

Though well back of Bovis, Sargis had built more than a 12-second lead over Huffaker in the fight for the final podium position until contact with a lapped car and a spin on lap 15 saw that all but evaporate. The veteran driver recovered quickly, however, and earned his 18th career podium finish. Huffaker remained in fourth at the checkered flag.

“I feel bad,” Sargis said. “I got into Rusty (Bell) when I was lapping him, coming into the last corner before you come back onto the oval the first time. I was along side of him and he came down. I tried to stop, but we hit and both spun. At that point, Peter had maybe a four second lead on me. I’d catch him a little bit, and lose him a little bit, so I don’t think I had anything for him. It was probably not the smartest thing on my part to do.”

Michael Kamalian dove his No. 99 Revolution Speed/Hoosier/G-Loc Mazda Miata inside the No. 10 Ward 360/Albatross Racing Toyota Paseo of Mark Ward on the final lap to secure a fifth-place finish.

Bill Ball improved his No. 85 Ball & Ball/Woodlawn Garage/AWE Nissan 200SX seven positions from the start, landing in 14th place at the finish, to earn the Sunoco Hard Charger award in GT-Lite.