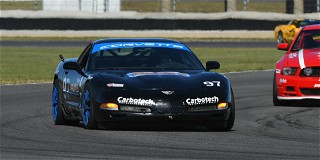 INDIANAPOLIS, Ind. (September 30, 2017) – John Buttermore, of South Lyon, Michigan, dropped back from the pole on the start but came back to win his first Touring 2 class and third total National Championship at the SCCA Runoffs® in his No. 97 Hoosier/Carbotech/Stoptech Chevrolet Corvette.

Second place went to Mark Boden, of Buffalo Grove, Illinois who charged from sixth place in the No. 46 Fall-Line Motorsports Porsche 997. Preston Calvert, of Potomac, Maryland finished third in the No. 77 Phoenix/Hoosier/Hawk Ford Mustang.

At the green flag, pole-sitter Buttermore did not get the start he wanted and fell behind the battling pair of Calvert and Kurt RezzetanoPhoenix/Hoosier/Hawk/Penske No. 37 Ford Mustang. On the next lap, Buttermore, Rezzetano and Calvert drove into Turn 1 three-wide, with Buttermore taking the lead.

Buttermore pulled out a small lead, but had to hold off the field after Natha Waldbaum crashed her No. 05 Corvette entering the front straight, bringing out a full-course yellow and bunching the field.

“I was very nervous when (the yellow) came out,” Buttermore said, “I thought, ‘oh no this is where it all goes wrong.’”

His worries didn’t come to fruition and Buttermore held the lead on the start.

“After that, I was pushing as hard as I possibly could,” Buttermore said. “Both these guys drove an amazing race from start to finish and made me really earn this one, so it has more meaning because of these two guys.”

Behind the leader, the battle for the podium was a ferocious one, with Bill Collins (No. 163 Interstate Truck Driving School/DRM Corvette), Michael Lavigne (No. 42 Auto Re-Nu-It Auto Body/Hoosier Ford Mustang), David Sanders (No. 73 Phoenix/Hoosier Corvette), Calvert, Boden and Rezzetano all taking shots at running in the top three. Contact between Collins and Lavigne took the pair out of contention, leaving the remaining four to duke it out.

Boden, who would work his way by Rezzetano and Calvert to take second place, was very happy with the results.

“What a wonderful event,” Boden said, “I have been racing with for so many years and it’s great to be a part of this.”

Behind Boden, Calvert held off an attacking Rezzetano in the final corners of the last lap to hold on to second place.

“Of course (I thought Kurt was going to get back around)” Calvert said, “he has more car control in his little finger than I’ll ever have and fortunately I was able to keep him behind me despite making a couple of mistakes.”

Even with the close racing, there were lots of compliments all around from the top three drivers.

“We all try to drive with respect for the other drivers,” Calvert said, “I think one of the things you saw in this race was people driving and leaving racing room for people and I thought it was a well driven race on everyone’s part that I was around.”

Another detail which didn’t go unnoticed by the podium finishers was the variety of cars on the podium and competing for the win.

“T2 is a class that just keeps pulling me back in because it is so much fun,” Boden said. “You’ve got great competitors and a great variety of cars and I truly think it’s one of the best classes in SCCA just from a standpoint of the variety and competition.”

Sanders followed fourth-place Rezzetano to fill out the top five. Joe Aquilante, a teammate of Calvert and Rezzetano under the Phoenix Performance tent, improved from 18th on the grid to finish 9th and earn the Sunoco Hard Charger award.