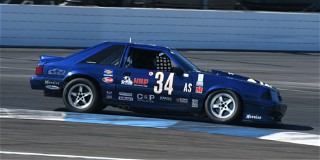 Indianapolis, Ind. (September 30, 2017) – Any time a thirteen-time champion appears in your mirrors, it’s a bad sign. But for 19 laps on Saturday during the SCCA National Championship Runoffs American Sedan race at Indianapolis Motor Speedway, Peoria, Illinois’ Bryan Long looked like the experienced champion on his way to the gold medal. John Heinricy, who has earned more titles than all but one driver in the history of the Club, was held to a silver medal, while Kevin Fandozzi, of St. Joseph, Michigan, finished third.

Long started from the Tire Rack pole in his No. 34 Hoerr Racing Prod/Roux/Pagid/Alcon Ford Mustang, and led every lap on the way to his first title.

That wasn’t decided, however, until the final run to the checkered flag. Racing inches apart through the final four corners, without contact, Brown got a run out of the final and to the yard of bricks to claim a 0.359-second win.

“This is incredible,” Long said. “We’ve been doing this a long time. We’ve built a lot of our own cars through the years, just as a family. This is a dream come true.

“When you have one of the best in multiple classes right behind you, you’ve got no choice but to give it all you’ve got and run hard. It was an exciting 19 laps, for sure. I was able to get a little bit of a lead, John had his hands full with the Cadillac for a while. I was definitely keeping an eye on that. At the end, he made it really interesting. We were able to hold through, but thankfully it was a 19-lap race.”

Heinricy added his second runner-up finish of the weekend, and his 21st overall, after sitting behind the No. 27 Space Monkey Racing Cadillac CTS-V of Drew Cattell until a pass down the Hulman Straight on lap 11. Heinricy’s No. 56 Hoosier/Mobil 1/Hawk Chevrolet Camaro quickly opened up some ground on the Cadillac, and set sail for Long’s Mustang.

By lap 16, Heinricy had closed to the tail of Long, and slipped and slid his way through the corners looking for a way around. It never came, however, and Heinricy kept the second-place finish.

“It was just an awesome race,” Heinricy said. “I had a big smile on my face and was laughing for half of the race, it was so much fun. I was just getting the giggles because we were running so hard, and the tires were getting tired and sliding, and the brakes were starting to lock, and you just watch what’s going on and can’t believe it’s happening. And it kept happening. Nobody goes away and spins out, it just keeps going. It’s just incredible fun. I don’t think I’ve had that much fun in years in a race. It was really good.”

Fandozzi, a two-time champ in his own right, slid over to the American Sedan class after years in touring cars. Though new to the class, the former champ drove his No. 12 Hoosier/Hayworth Brakes/Carbotech Chevrolet Camaro SS from tenth place, holding off Philip Smith’s Camaro until Smith dropped off, and then finding himself all alone and more than 25 seconds behind the lead battle at the finish.

“This year was an experiment for me to build an A Sedan car, and it’s been a great, fun ride,” Fandozzi said. “Running with these guys, the cars are so much fun. Every lap, every turn, I thought to myself ‘how is this car still running like this?’ I was just having a blast.

“I truthfully didn’t know where I was. I just kept running hard, and I passed as many people as I could. It’s a real honor to be up here with these guys. Bryan must have run a perfect race to stay in front of Mr. Heinricy here. For me to even be in their zip code, it’s a special day.”

Defending class champion Andy McDermid’s tough week continued. McDermid had to tow back home to Howell, Michigan after an opening lap, opening session incident on Monday to repair the car. The champ then started from the back of the field in the No. 24 WeatherTech Ford Mustang, drove to seventh in seven laps, and then saw his weekend end with a blown right front tire on lap eight and the most spectacular 27th-place finish in Runoffs history.

Photo: Bryan Long on the way to his AS title.