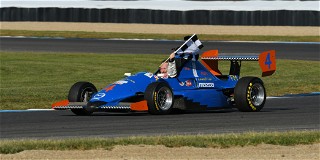 Jarrett Voorhies, of Kissimmee, Florida, visited the SCCA national podium for the first time finishing second and Mike Anderson, of Anza, California, claimed third for the second time in his Runoffs career.

“Crossing the bricks for the national championship didn’t set in, and still hasn’t,” said Kemper jokingly. “I’m 69-years-old, 50-years older than Jarret. I don’t have as many years left to win, so winning here at IMS for the first time is pretty exciting.”

The 16-car FM field completed 19 laps in the same session as the Formula Continental (FC) class. The first start was waived off, but Anderson took the lead on the second start attempt after Voorhies’ bobbled start. Voorhies, who dominated all four qualifying sessions, shuffled to the back of the field after a shunt in Turn 1. A full-course yellow caused by a FC oil spill allowed Voorhies to refire his No. 15 Mitchell Petroleum Star Formula Mazda and catch the field.

On the restart, Kemper challenged Anderson for the lead. Right on the gearbox of the No. 42 HASA Pool Productions machine, Kemper accelerated from the draft and squeezed Anderson on the inside to take the top spot. Voorhies picked off cars one by one trying to catch the front-runners, but killed his momentum when he looped his car in Turn 10. He continued in sixth.

“I was excited when I saw the double yellows but was worried about time,” Voorhies said. “I was moving up and down the entire race. Deep down, I might have given up after the second spin. I kept pushing though, knowing that podium was probably out of sight this year, but with a bit of luck and determination, here we are.”

Kemper and Anderson pulled away from the field with Liam Snyder, of Southlake, Texas, following in third. Kemper and Anderson continued to battle each other through the white flag. On the final lap, Anderson got caught in lapped FC traffic. Kemper extended his lead over Anderson and Snyder. Anderson fought to catch the race leader and on an attempt to overtake Kemper on the inside of the esses, spun off track. Close behind in third, Snyder’s podium-run ended after Turn 7 collected his Snyder Brothers Racing car.

A prowling Voorhies capitalized on the shunts to take second. Anderson continued the race to finish third.

“I saw the white flag and knew now was the time to make a move on Mel,” Anderson said. “He was faster on the straights, but I caught him in the corners. The track was so slick and I just went off. I recovered quickly, but Jarret had already passed. It was an exciting race to compete in.”

Larry Mason, of Burbank, California, finished fourth in his No. 12 Auto Diagnostic Services/Polar car and Snyder recovered from his last-lap shunt to take fifth. Matt Stephenson of Oklahoma City earned the Sunoco Hard Charger award in the No. 08 Bell Helmets racecar.