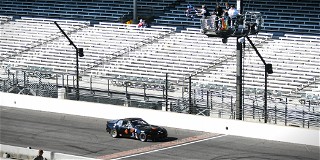 Van Steenburg’s previous Runoffs appearance ended in the lead, one lap prematurely, and his shot at redemption was delayed yet another year due to personal issues. But as chaos reigned all around Van Steenburg’s No. 4 German Excellence Porsche 944, he pulled into Victory Lane with his first title and a 2.441-second margin of victory.

“Daytona was such a heartbreak for me,” the newly crowned champion said. “I put it on the pole, and I’ve run that course so many times. To come one lap from the end and have a caliper fall off the car, that was pretty tough. So this is especially sweet. Last year, my mom passed away, so I had to deal with that and missed the Runoffs. So this is for her, and I couldn’t feel better.”

Van Steenburg got a breather after a hairy moment on lap six during a battle with Tire Rack polesitter Matt Reynolds’ No. 71 Reynolds Brothers Racing/Vintage Conn/JPM Mazda Miata. Reynolds made contact with a lapped car, cutting a tire and ending Reynolds’ day. From there, Van Steenburg managed the gap to the trailing cars and to the checkered flag.

“I was contemplating how I was going to get around that driver, and Matt caught me,” Van Steenburg said. “I thought, I’ll see what Matt does. Sure enough, he got collected and I went on the other side of him. It was almost like using someone like a pick in basketball. After we built a little bit of a lead, it was just trying to manage the tires. My car weighs so much, it just eats up tires, so you have to back up to push it to where there a little bit unhappy, but not completely unhappy.”

The craziness started at the green flag for the field, where just behind Van Steenburg and Reynolds was a flood of race cars.

“The start was absolutely crazy,” Dryden said. “There were nine of us all right there for first four or five laps. You’d look in the mirror and there was somebody else back there the next time.”

Slowly but surely, however, that field thinned out. Joe Moser slowed from second place on lap four and on lap 12 John Brakke spun (and nearly collected Prather) into the gravel in the battle for third. Soon after, a full-course caution came out, without a safety car, for one lap to retrieve yet another parked car.

“Kip played it smart and just kept his foot down,” Dryden said of the full course yellow, which meant no passing around the course. “By the time I realized there was no safety car coming, I tried to catch back up, but I think if I had managed to stay with Kip, then Jesse and I may have been able to run him down. He played it right.”

Prather was one of those who took advantage of the field at the start, moving from the fourth row to second in the first corner.

“I had the best start I could possibly get,” Prather said. “I probably could have gone to the lead, that’s how good of a start it was. Matt (Reynolds) gave me just enough room, up against the wall to the right, and I went around him, too. I think I came out in second, and then Moser went right back around me.”

A three-time champion in a car that was only raced once before the Runoffs, Prather didn’t try to stay in front early – instead, letting the 19-lap race play out.

“I was saying all week that this was going to be a race of patience, and that caught out a couple of people in this race,” Prather said. “We’ve got cars in this class that do different things differently. You’ve got horsepower and you’ve got handling, and we’re all balanced in there. It makes for great racing, but it also makes for the necessity of patience. I think the three of here were probably the most patient out there, and the race just kind of came to us. That’s part of being at the Runoffs, and the more you’re here, the more you realize it.”

Eric Powell, who battled for the podium early in the No. 41 CCP Fabrication/Kostopoulos Autosport Porsche 924S, finished fourth. Brakke recovered from his mid-race spin to finish fifth.

Peter Eels drove his No. 58 Always Green Racing Mazda RX-7 to a 19-position improvement, running from 45th on the grid to 26th at the checkers for the Sunoco Hard Charger award.