Kulach Back-to-Back for Nissan in Touring 3 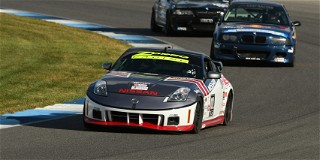 (updated: September 30 at 6:50 p.m. Eastern to reflect a change in third place in the official results)

Indianapolis, Ind. (September 29, 2017) – Derek Kulach, of Albuquerque, New Mexico, took advantage of an early race incident involving the front-row qualifiers and cruised to his second straight Touring 3 crown on Friday at the SCCA National Championship Runoffs at Indianapolis Motor Speedway. Kulach was joined on the podium by Andrew Newell, of Bellevue, Washington, in second. Marshall Mast, of Narvon, Pennsylvania, crossed the finish line in fourth but was elevated to third after a disqualification.

Kulach was in the thick of things on the opening lap, starting third, when Todd Lamb’s No. 4 Atlanta Speedworks Porsche Boxster made contact with Charles Hurley’s No. 95 Grip Racing/Car Tender BMW 330i through Turn 5. The contact moved Lamb outside and into Tire Rack polesitter Rob Hines, who went through the gravel trap in his No. 14 Nissan/Hoosier/G-Loc Nissan 350Z. With both Lamb and Hines then buried deep in the field, Kulach had clear ground in front of him.

With an open track, Kulach steadily pulled the No. 01 Fiesta Auto/G-Loc/Nissan Nissan 350Z away from the field, finishing 3.315 seconds ahead of eventual silver medalist Newell.

“I feel elated,” Kulach, who grew up in an SCCA family, said. “I grew up wrenching for my dad and its absolutely surreal thinking I can win let alone back to back. To me, it’s one of those things you read in a book. I’m super happy but a lot of things had to go right for me to win today.”

Newell struggled with brakes in qualifying this week on the No. 166 Strictly BMW/Grip Racing BMW SpecE46 during qualifying, and because of that ended up on eighth on the grid. Right or wrong, Newell admitted that he wasn’t fully certain that his brakes were going to work as he drove from the fourth row on the first turn, but they held and he worked through the field.

Using slower traffic to his advantage, Newell was able to get a run on his teammate, Hurley, on lap 14 and made the pass in Turn 12. The six-position improvement in the race also earned Hurley the Sunoco Hard Charger award.

“I had some braking issues earlier in the week and my ABS stopped working in the final two qualifying sessions, so I wasn’t able to put down a good qualifying time,” Newell said. “I had a good start getting to the front row and was able to run a clean race. I dropped behind Chuck, and I trust him a lot, to see if we could catch up with Derrick. Unfortunately, as the lapped traffic played out it didn’t play in our favor (to catch Kulach). I had a great race. This track is amazing to run at. I’m just happy to be here.”

Hurley recovered from the contact early with Lamb, and then weaved his way through traffic to cross the finish line third. However, Hurley was later disqualified by the stewards for the first-lap incident.

“Andrew and I tried to work together to close the gap on Derrick, but sometimes you get the lapped traffic right, and sometimes you don’t,” Hurley said. “I didn’t this time around. There were a few times we got held up significantly. At one point, I got held up really bad and that’s when Andrew was able to make his run and take P2.”

Mast was elevated to third in the No. 31 Phoenix Performance Ford Mustang, just ahead of a recovered Hines, now fourth. The change moved Ali Salih, sixth on the track, to fifth in the official results.