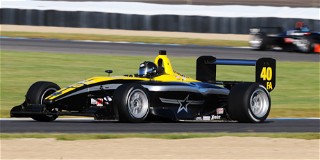 Grant’s No. 40 Mazda/Hoosier/Polestar Swift 016a/Mazda started on the front row, alongside Tire Rack polesitter Sedat Yelkin’s No. 17 Everclear Swift 016a/Mazda. The two identical cars matched each other for speed across the track six times to start the race, but on the seventh circuit Grant used the draft down the front straight to move in front entering Turn 1.

“The lapped cars made a difference today,” Grant said. “I knew I had to stay nose-to-tail with Sedat the whole time.”

Once in front, Grant was able to clear a gap for his first National Championship in class, and the second of his career. Grant’s last title came in the GT-4 class back in 2003. Grant’s final margin of victory was 3.217 seconds, covering all 19 laps in 100.647 mph.

“I thought this win would come a lot sooner,” Grant said. “Some got away, some just had some really good competition that beat me. It’s been a long time coming, but I think it’s really rewarding not only for me but for the team. It’s fun to drive on a course like this with the prestige that Indianapolis brings to it.”

Yelkin’s drive became more difficult when his right front flap on his wing came lose, slowing him down. By the end of the 19-lap race, Yelkin had to switch his strategy from chasing Grant for his second title, and holding off Brockman for his second career runner-up finish. Brockman’s No. 34 Mazda of Milford/Mazda/Hoosier Swift 014a/Mazda got close to Yelkin, but Yelkin held on for the silver medal.

“The beginning of the race was pretty typical,” Yelkin said after his fourth podium. “I didn’t have a dynamite start by any means, but we did good.

“Right when I was able to put just a big enough gap on Keith that he wouldn’t have a draft on me, I caught some traffic, got clipped on the front, and lost the front flap. I didn’t know it at the time, but it was backing up my braking points about 100 feet and made the car real difficult to steer.”

Brockman ran alongside Yelkin late, but couldn’t make the pass stick. For Brockman, it was his second-consecutive third-place finish in the class, in just his second appearance at the Runoffs.

“All week we struggled with pace,” Brockman said. “In the beginning I saw they had a little bit of a gap, but I just tried to maintain the gap, get through the lapped cars cleanly, and toward the end I saw I was catching Sedat.”

Lee Alexander drove his No. 48 Factory48/Comprent Motorsports Swift 016a/Mazda to sixth, from eighth on the grid, to earn the Sunoco Hard Charger.