Shafer Runs Away With Prototype 2 Class 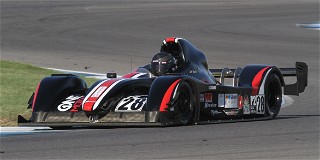 Indianapolis, Indiana (September 29, 2017) – Jeff Shafer, of Las Vegas, left the Prototype 2 field behind from the Tire Rack Pole and cruised to his second SCCA Runoffs title in a row on Friday at Indianapolis Motor Speedway. Tim Day, Jr., of Scottsdale, Arizona, and Greg Gyann, of Willowbrook, Illinois, joined Shaffer on the podium after a back and forth battle.

Shafer qualified his No. 28 One Motorsports Stohr WF1/Suzuki on the pole by more than three seconds, and was nearly 10 seconds ahead of the field after just two trips across the yard of bricks.

From there, it was all about maintaining the gap to the title.

“My journey with my wife started here, about 23 years ago,” Shafer said. “We lived here for a year, and I had just started getting into racing cars. I came and watched the Indy 500, and obviously dreamed of driving on the race track. It hasn’t worked out on the big oval, but this is pretty darn close. It’s fun to come back. It’s an awesome feeling to get out here and actually win the race. We saw a big list of names on the podium of Formula 1 and NASCAR guys who have won the race, and hopefully SCCA gets added.”

Behind the champion, however, was a back and forth battle. Day’s No. 8 Mere Mortal/Hoosier Stohr WF1/Suzuki started second, but briefly lost the position on the opening lap to Gyann. Day recovered, but held his mirrors full of Gyann’s No. 83 Argus Magnetics/Gycor International Stohr WF1/Suzuki for seven laps.

Gyann moved in front of Day on lap seven, but the two black prototypes remained in lockstep. Coming down the Hulman Strait on lap 12, Day moved back to the runner-up position under braking in Turn 7, and held on for the final seven laps for his first Runoffs podium.

“Although we were second fiddle to Jeff Shaffer, (Gyann) and I were neck and neck,” Day said. “Early in the race, he got a good run on me, and at that moment I knew I had to be 100 percent focused because it was game on. The important thing was not to overdrive the car and let him get a serious gap.

“It was a really good race, I think he’s a great competitor. This is my first year in P2, so we’re completely stoked with the results.”

Gyann earned his second podium in as many years with the third-place finish.

It was great. It’s always fun. Last year at the Runoffs, I had basically the same situation with Sherman Chao, and this year, here I was again. It’s a lot of fun. You try to form a hair of a strategy before the race starts, and then the green flag drops and that’s out the window. I had no intention of getting Tim in turn one or two, but it was there and I took it. It’s fun to just be out there and improvise.”

The aforementioned Chao, in the No. 3 Lee Racing/GDRE/Hoosier/Hawk Stohr WF1/Suzuki, and Jake Thielmann, in the No. 55 SOBright/Phoebe Products/Moons Cycle Stohr WF/1 Suzuki held their starting positions through the race to finish fourth and fifth, respectively.