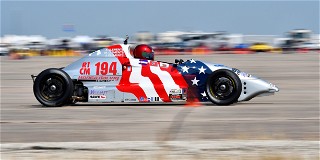 LINCOLN, Neb. (September 3, 2017) – After last year’s monsoon, competitors were welcomed to Lincoln with overcast skies and predictions of sunshine for the weekend of the 2017 Tire Rack ProSolo® Finale. As the final event in a year-long points championship, there were strong favorites heading into this weekend. In many cases, however, it was the underdog coming from behind who took the win.

That was no truer than in Race Tire 1 where Johnathan Clements took the lead on his final runs to overtake Jeff Keisel and claim victory by 0.079 second. Keisel was the favorite to win in his E Modified-prepared Bugeye Sprite. Marshall Grice and Jak Keisel claimed the third and fourth trophy positions, making it a West Coast podium.

Clements came into the Super Challenge qualified 11th. In the second round, he defeated reigning Super Challenge winner Billy Davis in the C Street Prepared Miata. He then defeated C Street winner Tyler Kvetko before facing Larry “Lefty” MacLeod in the Kart Modified. MacLeod put on a show through the challenge. Due to the speed and acceleration of the kart, MacLeod started each run with what seemed like an eternity of a disadvantage, but made it up in the final straightaway of the course. In the Clements-MacLeod pairing, this trend continued, but the C Modified Van Diemen of Clements had enough speed to stay ahead of the kart, taking the win.

On the other side of the bracket, Jeremy Foley worked his way through to face Brian Karwan in the final four. With a 0.085-second lead for Foley heading into the final run, Karwan red lit, sending Foley to the final round. On the first side though, it was Foley’s turn to red light, handing the season-ending ProSolo Super Challenge win to Jonathan Clements. In the third-place runoff, it was Larry MacLeod taking the win as Karwan tagged a pair of cones.

In the Ladies Challenge, Jordan Towns came in with top qualifier honors thanks to her Ladies 2 win. She’d ride that advantage all the way to the final round where she faced Ladies 3 winner Kim Whitener. To get to the final pairing, Towns defeated Ladies 1 third place finisher Tamra Hunt, and Whitener defeated Ladies 1 winner Shelly Monfort. In the third-place runoff, it was Hunt emerging the victor as Monfort snagged a cone. But in the final round, much like the Super Challenge, it was Jordan Towns taking the win as Kim Whitener cut a 0.459-second red light.

The favorite to win in A Street was Mark Daddio. Often referred to as an “alien,” a title only given to the best drivers in autocross, Daddio established a lead early on Saturday. But cones and difficulties forced him to settle for his first times on each course, opening the door for Matt Jones. In the all-Chevrolet Corvette field of seven, Jones defeated Daddio by 0.089 second. John Laughlin claimed the third and final trophy position only 0.238 back from Daddio.

Street Touring Roadster has grown to be one of the most popular classes in SCCA® Solo competitions. Dominated by Mazda MX-5s and Honda S2000s, this class has been a consistent entertainer throughout the 2017 season. With 28 drivers at the Finale, this weekend was no exception. The eight trophy positions are separated by just a half second. Taking the victory was Brian Karwan, who would advance to the semi-final round of the Super Challenge in his MX-5. Hot on his heels, just 0.060 second back was David Marcus in his MX-5, then James Yom, 0.112 second behind in an S2000. Vivek Goel, Ron Bauer, Kevin Dietz, Michael Yanase and Ken Motonishi claimed the remaining trophies in an even trophy split between Mazda and Honda.

David Whitener was the favorite in Street Touring Sport in his Mazda Miata after having several strong finishes throughout the ProSolo season. But on this trip to Lincoln, it was the Honda CRX of Mark McKnight taking the STS win by just 0.007 second. Ron Williams, Kinch Reindl and Shane Jensen claimed the remaining trophies, all in Hondas.

Congratulations to all participants in the 2017 Tire Rack ProSolo season and the champions to be crowned this evening.

Full results from the 2017 Tire Rack ProSolo Finale can be found here.