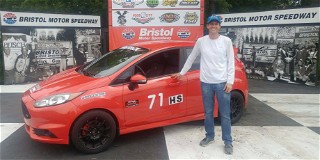 Topeka, KAN. (July 7, 2017) - Following two days of Tire Rack Championship Tour competition, 200 competitors returned to Bristol Motor Speedway for the Tire Rack Bristol Match Tour. In the Match Tour format, drivers take to the same course in two heats, morning and afternoon to determine class winners. Then on day two, drivers have three runs to qualify for the Challenges. The top eight drivers in each heat advance to the Top Dog Challenge. The next eight to the Underdog Challenge. Additionally, eight names are drawn from a hat for the Lucky Dog Challenge.

Class competition started Monday morning with Eric Peterson expanding on his Champ Tour victory. Peterson held a 1.211-second lead over Adam Norton after morning runs and continued to find time in the afternoon, stretching his advantage to 2.559 seconds. Kevin Lindley and Stephen Rife filled out the remaining trophy positions, all in Toyota MR2 Spyders.

Just across the grid, D Street was being dominated by Subaru WRXs. Dennis Sparks jumped to an early lead on first runs, but was overtaken by co-driver Jordan Towns and Christopher Kavka by the end of morning runs. When they returned in the afternoon, Jordan started laying down consistent, fast runs and didn’t look back, only varying her times by a few tenths. Kavka and Sparks finished second and third to take home the trophies. This is Jordan’s first Tire Rack National Solo win in an open class.

The Ford Mustang owned by Jeff Cox was working hard through the entire event, running in at least three classes each day, often with two drivers in each. When piloted by Jeffrey Mark Pilson in CAM-C, the car was nearly unbeatable. After claiming a win at the Championship Tour, Pilson claimed victory again at the Match Tour, but not without some competition. After morning runs, Adam Schoonmaker led Pilson by just 0.042 second in the ’64 Chevrolet Chevelle. In the afternoon, Pilson laid down an unprecedented 54.155 to claim a 0.978-second victory over Schoonmaker. Alan Schoonmaker and Berry Langley filled the final trophy positions.

Throughout the weekend, Kyle Herbst dominated Street Touring Xtreme in his Scion FR-S. His 52.783-second run and 52.794 in the afternoon were the only two runs in the 52s from a STX driver that day, giving him a 1.441-second margin of victory. Raymond Dsouza, Gregg Henderson and Max Appelbaum claimed the other trophies.

Usually in autocross, a dominant margin of victory is anything measured in multiple seconds. In the case of Street Modified, dominant is an understatement as Tim White stretched out a 6.172-second margin of victory over his competitors. As a point of reference, his times would have slotted him in second place in Super Street modified, just 0.295 behind Randall Wilcox. Doug Keiler and Ben Bulthuis claimed the remaining trophies, with two DNFs preventing Bulthuis from advancing in the afternoon.

Following some adversity in his own DS Scion FR-S, John Wolf jumped into Justin Barbry’s BS Chevrolet Corvette for the Match Tour. After finishing second to the car owner in class competition, Wolf claimed top qualifier status for Heat 1 and advanced to the Top Dog Challenge. Through the single-elimination bracket, he continued to lay down consistent times just a few tenths off his dial-in before arriving in the final round. From Heat 2, Darrin DiSimo found some luck as his second opponent, Jason Ruggles, posted a DNF, allowing DiSimo to advance despite two cones. In the semi-finals, two cones kept Drew Tonnesen from advancing, allowing DiSimo to represent Heat 2 in the final round. From Heat 3, Robert Carpenter kept the Cox Mustang consistent and fast to advance past car owner Jinx Jordan, Jeff Cox and Michael Bright on the way to the final round. Wolf led the final trio on course, keeping it clean and beating his dial-in by 0.273 second. DiSimo was next, and was only able to get within 0.357 of his dial-in, not enough to claim victory. Finally, Carpenter crossed the line, a second off his dial-in and carrying a cone, handing Wolf the honors.

Next up, eight lucky drivers got an opportunity for redemption thanks to a random draw. In the final pairing, it was Stephen Vrooman in a CAM-C Dodge Challenger and Adrian Willis in a CSP Mazda Miata. Had he not lowered his dial-in during the first round, Adrian would have claimed the Challenge win. But instead, he came up just a bit short while Vrooman continued to lay down consistent runs and claimed victory.

Finally, Underdog Challenge drivers rolled to the line. Johnathan Lawson continued to improve every run during the Heat 1 bracket, lowering his dial-in with every look at the course. From Heat 2, Gene Rebas found major time on his first run, lowering his dial-in by over two seconds, then by another 0.080 in the second round on his way to the challenge final. The Heat 3 bracket contained a pair of byes, but concluded in a faceoff between Timothy “Buckie” Maxey and Ginette Jordan. While Maxey hit a cone, Jordan dropped two, handing victory to the cleaner of the pair and allowing Maxey to advance to the final. Lawson started first, keeping a fair distance from the cones but getting within 0.2 second of his dial-in to set the precedent. Next, Rebas also stayed clean, but missed his dial-in by 0.551 second, which was not enough to surpass Lawson. Finally, Maxey took to the layout and hit the second cone on course, as well as two additional ones, ensuring Lawson’s victory in the Underdog Challenge.