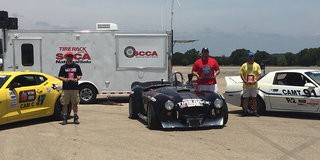 This last weekend marked the second in a series of four CAM Challenge events. Ninety cars competed in Mineral Wells, making for lots of runs and many smiles in addition to some amazing competition. Hosted jointly by SCCA and the Texas Region of the SCCA, this CAM Challenge brought out 75 CAM cars and 15 cars who ran the Index class. All competition started on Saturday with run groups competing in both the morning and afternoon. Sunday morning was more qualifying runs that led to the Sunday afternoon bracket challenge with the top drivers paired up top to bottom in the Challenge brackets. The challenge culminates in the top three class drivers competing for the overall win.  The CAM Challenge event kicked off Friday night with a dinner sponsored by Vorshlag Motorsports.

Something to note about the Mineral Wells event is that in the tradition of the SCCA Foundation and the Club’s commitment to charitable ventures that bring new people to the sport: the VETMotorsport group was running in the SCCA Mobil One Camaro in the CAM-C class. The Mobil One Camaro was wheeled by two drivers – both veterans. When one vet driver was asked about his experience, he said that it brought a peace of mind to his well-being that he hadn’t had in years. Texas Region now has two new members who are excited to be joining our sport.  SCCA highly recommends partnering with organizations like VETMotorsports, in your Regions to bring motor sports to those who can benefit from the experience.

In the CAM-T(Traditional) class, competition ended on Saturday with Mark Madarash from Red Oak, TX winning in his 1988 Trans Am. While Mark dominated the class, the next six drivers were within one second at day’s end. Coincidentally, the next six spots were all taken by Chevrolet Camaros. Kyle Tucker commuting all the way from Mooresville, North Carolina took second and Derrick Torres from Ft. Worth, TX in third. It seems that these days, the cars to beat in CAM-T are all running on BF Goodrich Rival S tires with the top thirteen drivers in CAM-T rolling on BFG.

Saturday night was a fabulous dinner hosted by Dusold Designs (Mike Dusold being a worthy competitor in the CAM-S class). SCCA thanks Dusold for their support and for aiding in the fun and overall experience for event attendees.

In the CAM-S(Sport) class David Lousteau Jr. from Maumelle, Arkansas took the top spot by more than one second in his 1965 Cobra. The next three drivers in the class were within four-tenths of a second of each other with David Whitener taking the number two spot over Mike Dusold in third and Brad Matteucci in fourth.

Sunday morning had competitors hot (literally) on the trail of Saturday’s leaders. With times so close, you could feel the hunger for a win in the grid. After the Sunday morning’s qualifier runs were complete it was Mark Madarash in the number one spot for CAM-T; David Lousteau Jr. took the lead for CAM-S and Rusty Henderson took the top time from his co-driver Keith Lamming in the CAM-C class.

The final challenge was nothing short of a barn-burner of excitement. Mark Madarash in CAM-T plowed through the field of eight cars in the class to meet legendary Kyle Tucker in the finals. In the end, Madarash took Tucker by a margin of .849 for the class win. David Lousteau Jr was the number one qualifier in the CAM-S bracket of 16 cars eventually taking the top spot over Brian Matteucci, the number two qualifier, by a half second. In the CAM-C class, the battles were hard fought with times being tight among the 16 qualifying competitors. Rusty Henderson, Keith Lamming and Chad Langley (in a 2017 Camaro he borrowed from Robert Wethers) were the top three battling it out. In the end, Langley knocked enough time off the clock to bump Henderson out of the finals. Lamming had the better time against Langley in the final round by two-tenths, but hit a cone.

As if the challenge runoff wasn’t enough excitement, the three leaders of the T-, S- and C- classes faced off with two runs each pitting modern and sport muscle against the decades old traditional cars. This is often the truest show of a driver’s skill and a testament to the ‘run-what-you-brung’ approach of the CAM class in general.

For the championship round, all three drivers took two runs. Madarash took his first run and managed to pull off his best time of the day; no doubt he was on the hunt for first after taking second in 2016. Madarash’s time forced Langley and Lousteau to scratch their heads and come up with a half second reduction somewhere on the course on their second runs.  Madarash held the lead and looked unbeatable until Lousteau ran his quickest time of the weekend in his final run. Lousteau pulled off the winning time by a margin of .034 leaving Madarash in another second-place spot and Langley in third.

There were three sponsored raffles with one gentleman winning two of them!