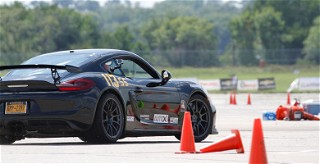 Topeka, Kan. (May 12, 2017)- The Kelly Cup was announced in 2016 to annually recognize an SCCA® member who has shown extraordinary dedication and contribution to a Regional Solo® Events Program. The Kelly Cup is named in honor of Pat and John Kelly for their tireless leadership efforts in developing a strong and sustainable Solo program in the San Francisco Region. Finalists are chosen by the Solo Development Coordinators from nominations submitted by the membership at large, with the recipient selected by the Solo Events Board.

The Solo Events Board received nearly 20 nominations for the inaugural Kelly Cup, demonstrating the large group of members who go above and beyond the call of duty to make SCCA regional autocross programs exceptional. The name that rose to the top of the pile this year was Perry Aidelbaum. Brian Connors, Chairman of the Solo Events Board, highlighted the importance of recognizing these devoted individuals.

“Our regions rely heavily on the efforts of a few key people,” Connors said. “The Northern New Jersey Region of the SCCA has been relying on Perry’s involvement in the local program since 1995.”

Since 1996, Aidelbaum has hosted AutoX4u.com, a virtual hub of autocross resources for participants in the Northeastern states. From live timing and event coverage to novice resources, Aidelbaum’s commitment to the sport of autocross is transparent in his actions.

In addition to leading the NNJR Solo program, Aidelbaum is known for his course design skills. He said he started course designing to give participants a reason to look forward to and travel to NNJR events.

“I feel that providing a challenging course not only makes it worth coming to the event, but also prepares you for the Tire Rack Solo Nationals,” Aidelbaum said. “People always ask me after walking one of my courses, ‘You have a course map of it?’ Nope, never do. I just drop cones in the lot, then magic happens.”

Noting he was the only person in his family with an interest in motorsports, Aidelbaum gives credit to Derek Francis for bringing him into the autocross community more than 25 years ago. The SEB and SCCA thank Aidelbaum and all those who support him in running the NNJR Solo program.