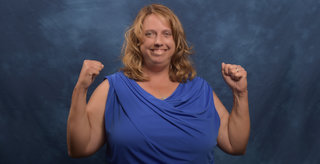 TOPEKA, Kansas (Dec. 19, 2016) -- The SCCA Solo Driver of the Year, chosen by the Solo Events Board from nominations submitted by the membership at large, is awarded to the competitor who has demonstrated exceptional skill or has overcome major obstacles to produce an outstanding performance at the Tire Rack SCCA Solo National Championship. This year’s winner is Cindy Duncan, of the Central Kentucky Region.

After garnering a string of second- and third-place finishes at the Tire Rack Solo Nationals over the last several years, Duncan arrived in Lincoln, Nebraska, last September determined to finally take the win.  However, a prior back injury reared its head just prior to competition, sending Duncan off to a local Urgent Treatment Center.

But even with a suspect back, Duncan held the lead in F Street Ladies going into the final day of competition.  Fate, however, was not done with its attempt to foil her bid for a championship title.  Just before the fifth heat on Friday of the Tire Rack SCCA Solo National Championships, historic rains drenched the venue and caused an unprecedented two-hour delay in the action.  The 66 drivers in her heat had to wait for the downpour to stop before taking to the West Course.  Splashing and sliding through the standing water in her Ford Mustang, Duncan put down her fastest time on her first run.

Unable to improve on her subsequent runs, she watched as other drivers whittled away at her 0.471-second, first-day advantage as water slowly started to drain from the course.  But with a rainbow emblazoning the sky after the heat, Duncan’s time held up, resulting in a 0.379-second victory and her first national championship -- a fairy tale ending for the 2016 Wendi Allen Scholarship recipient.

The Solo community is invited to celebrate with Duncan when she receives the Solo Driver of the Year Award on Saturday, January 21, during the 2017 SCCA Hall of Fame and Awards Banquet which caps off the 2017 SCCA National Convention at South Point Hotel and Casino in Las Vegas, Nevada.  Banquet tickets are $80 and can be purchased online at the SCCA National Convention webpage.