Das Spends a Night with the Stars 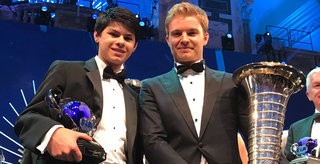 The 2016 Formula 4 United States Championship Powered by Honda season culminated for inaugural season champion Cameron Das on Friday evening as the up-and-coming star was honored on the same stage as Formula One World Championship champion Nico Rosberg during the FIA Prize Giving Ceremony at the Hofburg Imperial Palace in Vienna, Austria.

The year-end event celebrates the achievements of the FIA championship-winning drivers and teams from around the world.

Highlights of Das’ evening were walking the red-carpet bordered by Austrian fans, meeting racing hero Rosberg and being seated next to F1 driver Daniel Ricciardo and Executive Director of the Mercedes F1 team Paddy Lowe.

“Being around my racing heroes was surreal,” said Das. “There was no longer a barrier between us, and I felt a part of the international racing community. It also made me realize just how small the world is.”

Full event photos can be found at flickr.com/photos/fia-official/.

All honored guests on stage. 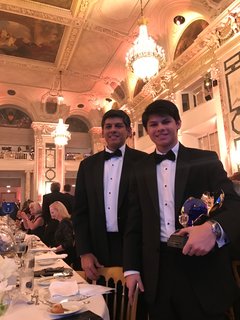 Cameron Das and his father, Babi Das, pose for a photo after the awards' ceremony.