First-Year Victories Solidify the Future of F4 in the US 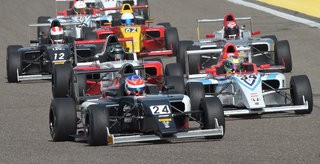 From making its public debut at the 100th running of the Indianapolis 500 to awarding more than $77,000 in cash prizes, the Formula 4 United States Championship Powered by Honda experienced several milestones during its inaugural season and is gaining momentum as the championship heads into its second season.

The youth-focused series serves as a building block to attainable open-wheel racing for competitors transitioning from karts to cars. During its first season, the series grew from 14 competitors during its global racing inauguration at Mid-Ohio Sports Car Course in July to entering a total of 19 different drivers over the course of the season.

Cameron Das of Brooklandville, Maryland, was crowned the first F4 U.S. season champion with Konrad Czaczyk of Loxahatchee, Florida, and Kyle Kirkwood of Jupiter, Florida, also earning spots on the championship podium. The trio would combine for 28 podium visits, 18 fast times and 14 of the 15 pole position starts.

The second F4 U.S. Championship season is forecasted to see significant growth, not only with entries, but also with teams and an expanded schedule.

The F4 U.S. field is expected to increase during its second campaign with 30 Crawford FL15 chassis orders already placed for the upcoming year. Nine teams competed in the opening season and that number is likely to increase as orders continue to be fulfilled.

“MDD is a national junior-karting specialist program aimed to develop young drivers, but we were ready to find the next step to help those drivers transition into cars,” Howard said. “There was nothing appealing in the market until the introduction of F4. We are excited to be part of the 2017 F4 U.S. season.”

After signing two of its karting drivers, MDD still has two open seats available and will begin testing with potential prospects this winter.

The schedule for the 2017 season will expand from five event weekends­­ with 15 races to six events and 18 races. The official schedule is slated to be announced during the Performance Race Industry show held in Indianapolis from Dec. 8-10.

Prospective teams and drivers can visit F4USChampionship.com for more information regarding series investment, seat availability and to view the official team list. Drivers who are interested in testing with MDD visit JayHoward.com.