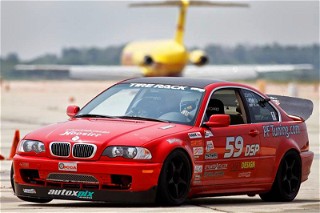 The debate of whether Autocrossing or Road Racing reigns supreme in the world of amateur motor sports has been ongoing for decades, and if you have participated in either at some point you have likely engaged in some form of dispute among fellow competitors. After coming across the article "Just Accept It: Autocross isn't Racing" that The Truth About Cars published late last year, it made me once again reflect on my own opinions. Of course you can see that the author clearly has a strong opinion solely from reading the title, but it wasn't the premise of the article itself that I had a problem with.

I believe you could have a valid argument to challenge whether or not Autocrossing should be considered racing, but that would all come down to what your definition of racing is. If competing for time is racing or not, that is up to your discretion. That wasn't the only point the author was trying to make, however, because he goes further by criticizing Autocrossing as a whole and the people that partake in it. It wasn't until I got to:

"Frankly, I was never all that great at Autocross--" where every word that followed was irrelevant to the matter at hand. His lack of experience in the sport is a clear indication that he is an unreliable source to form an opinion from. Having been rather successful in both departments thus far, I would like to provide a more balanced review contrasting the two forms of racing. 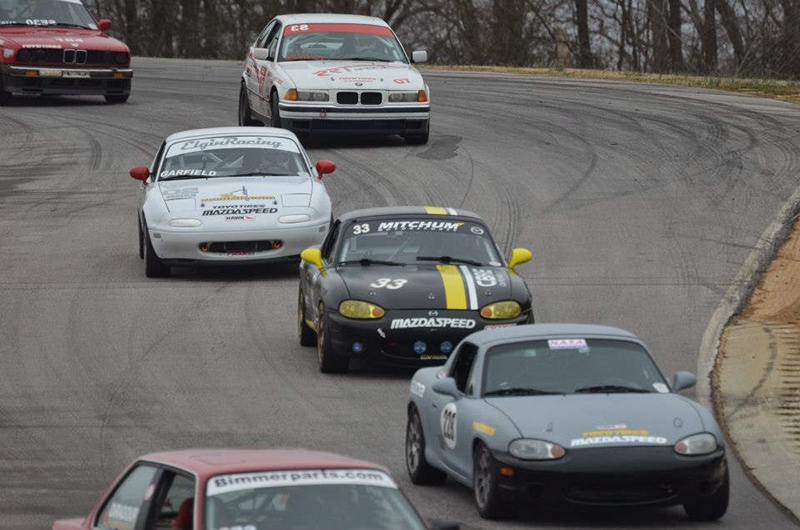 Aside from perhaps NASCAR in the United States, Road Racing is what most often will come to mind when discussing car racing to the general population. I personally competed in "wheel-to-wheel" Road Racing for the 2012 and 2013 seasons, acquiring both NASA and SCCA competition licenses. While picking up several wins in Showroom Spec Miata, a large regional class, I also competed in the annual 13-hour endurance race held at VIR. 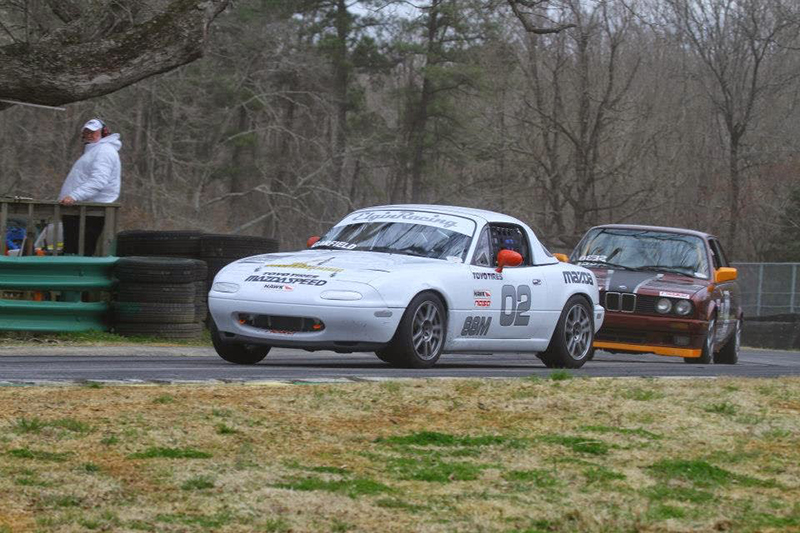 Road Racing is a high-speed, intense battle among competitors where consistency, keeping a cool head, thinking ahead, and a fair amount of chutzpah are required to run at the top of the pack. There is a significant amount of risk when out on the track, where minuscule mistakes cost you a few positions if you're lucky, and far worse if you're not.

Road Racing allows you to reach speeds that can't (shouldn't) be seen anywhere else in a car. With no speed limits, and a mile of open pavement before the first corner, some cars can reach speeds of 150mph before jumping on the brakes for turn one. It's at this point you can only hope that you put your brakes back together properly a few days prior, and you complete that turn yet another lap.

Over the course of a typical racing weekend, you receive hours of time on track, broken down into several fifteen, twenty, thirty minute sessions. Autocrossing on the contrary, proceeds sixty seconds at a time so it can be assumed that more physical and mental endurance is required in Road Racing. Endurance Road Racing includes sessions that may last up to two or three hours, and extreme focus is demanded throughout the entire stint.

There is also a discipline factor that is required in road racing that is not in Autocrossing. Planning and executing the perfect pass takes a lot of patience, and a serious adrenaline rush comes with it. There is no other feeling like two people attempting to occupy the same apex in the quickly approaching corner, and you won't find it driving around cones on a parking lot. 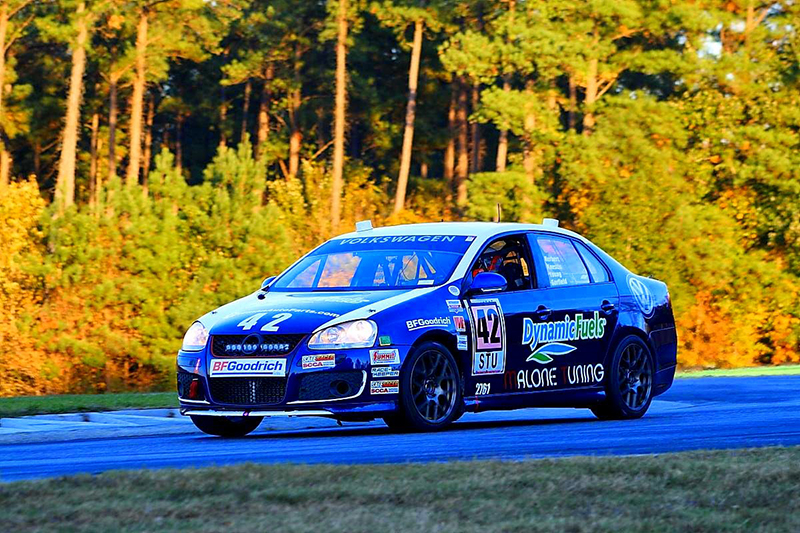 There is a reason I no longer participate in road racing; it's just too expensive. A prepared track car isn't necessarily more expensive than a prepared Autocross car, but the overall expenses are much higher. To conservatively campaign a competitive car in a regional road racing series, it'll set you back roughly a grand a weekend, which is a lot of lettuce over the course of the season. This is assuming you make it through unscathed, without any blown motors or car-meets-wall experiences. And while no one wants to make any costly errors on track, it does happen and you foot the bill for your own car, regardless of who is to blame.

With as serious as Road Racing can get, even at the amateur level, misinterpretations of the rules do occur. Since power is essential to keeping up with the competition down the long straightaways, most people are trying to get every bit of it from their cars, making the way rules are written very critical. Vague regulations tend to cause uproar, especially on a national level.

So if people are going through all this trouble, there must be a huge payout, right? Not exactly. While you may be able to win your entry fee back in contingencies at larger-scale events, your reward is usually a small trophy and your head swelling about 1/4" in diameter. Amateur Road Racing is a gentlemen's hobby, and it's not necessarily any different to the "professional" series you see on TV.

Autocrossing, or referred to in the SCCA as "Solo" is a time-based event where competitors drive their vehicles through a course defined by cones as hastily as possible. Their times are compared to other drivers in alike cars built to the same degree of the rules. These events are most often held on large, wide open parking lots found at sports stadiums or airports.

Having been involved in Autocrossing for over two thirds of my lifetime, I have become very connected to the sport including serving on my local region's staff. I have picked up my share of wins and championships on the national level, and work as an Autocrossing instructor regularly. 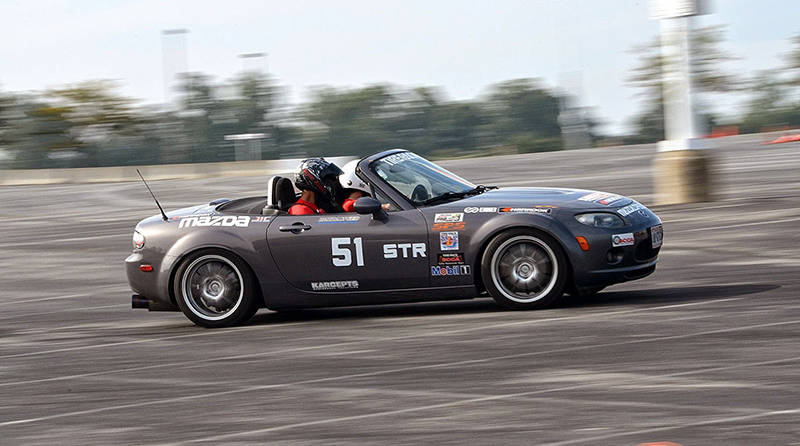 Autocrossing puts a driver's ultimate car control to the test, where precision, looking ahead and quick adaptation is key to success. With a very limited number of chances to master the course, the way the driver can handle pressure is important to their overall performance. Autocrossing can provide you with one of the most extreme 60-second periods you will ever experience.

A typical Autocross consists of 3 or 4 attempts at a course that no one has ever seen before, and no one will ever see again. If you were to add up the total amount of time you spent Autocrossing on a given Sunday, you might realize that you spent twice the amount of time sitting on the toilet that day. This is the most common discouragement that pushes people towards road racing, and with good reasoning. Autocrossing has to be appreciated for what it is, part of the sport is only getting so much time on a course, or certain skills become irrelevant.

A major advantage to Autocrossing is that it can be done at a fraction of the cost of Road Racing. Lower entry fees, lower maintenance costs, and a significantly lower chance for damage repairs. Contingencies pay roughly the same as road racing, but there have been people known make more money than they spend in a successful season. The huge difference is that your Autocross car cannot be lost in the blink of an eye.

Autocrossing is truly the only place where you can push your car to the absolute 100% edge of grip, without any consequence. With the worst thing you can hit being cones, it allows you to safely find the maximum capabilities of your car. While it teaches excellent car-control skills, it sometimes can create a reckless habit when an Autocrosser transitions onto the road course.

The author who wrote the referenced article above makes the claim,

"Wheel-to-wheel racing requires every skill autocross does, and sometimes exponentially so."

If this was the case, any road racer would be able to instantly jump into the seat of an Autocross car and match the times of any top-national Autocrosser, which is never the case. The fact of the matter is, Autocrossing provides you with swift reaction time and precise car-control skills that most road racers do not obtain from just road racing. Fast Autocrossers often make for great road racers, Randy Pobst and Bryan Heitkotter come to mind, but fast road racers usually have some work to do if they step over to Solo.

Protesting is a rare occasion in the Autocrossing community. This isn't to say that no one is actually bending the rules, but the little things that may matter in Road Racing, make no difference on the Autocross course. Autocrossing consists of constant turning at relatively low speeds, so an additional one horsepower is quickly lost in all the mistakes that are made in an Autocross run. On top of that, Autocrossing rules are very particular to allow people to enhance the performance of the cars they drive on a daily basis, but keep comfort and convenience items to prevent from tearing apart the car. With little concern of people straying from the tightly-knit guidelines, Autocrossers are able to argue about more useless issues on the internet such as car floor mats and the numbers stamped on tires.

Learning from experience, Autocrossing just doesn't seem cool to the general public. To an outsider, you are spending the entire day on a parking lot so you can drive around cones for 5 minutes, and reach higher speeds on the highway on your way home. If I'm trying to impress a high school classmate when approached upon the subject, I'm going to tell them about road racing, 120 mph inches from other cars' door handles. Not driving around cones on a parking lot.

To argue one trumps another is foolish. Autocrossing and Road Racing are amateur motor sports, they both require different skills and both supply a different thrill. At the end of the day, we're all people that spend way too much money on cars.

You can no longer consider yourself a sane human being once you have participated in any form of motor sports. Often compared to crack cocaine, racing as a whole is very expensive, and requires you to keep dumping money into the sport on a regular basis... and none of us stop.