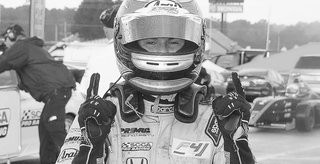 As a member of Team USA, the 17-year-old jetsetter from Jupiter, Florida, flew straight from Homestead-Miami Speedway to London, England on Oct. 9 after the F4 U.S. Championship banquet.

Kirkwood will represent Team USA in the Formula Ford Festival in Brands Hatch, England, from Oct. 21-23, and will also have the opportunity to race for the Walter Hayes Trophy at Silverstone from Nov. 4-6.

Last week, Kirkwood took advantage of four 40-minute test sessions at Silverstone Circuit. Two of the sessions took place in the rain, allowing Kirkwood to gain experience under wet conditions, but the weather cleared for his final two rounds. The day ended with Kirkwood and fellow Team USA driver Oliver Askew of Jupiter, Florida, within a tenth of a second of each other.

Day two of the pair’s testing was held at Rockingham Motor Speedway in Corby, England.

“Rockingham is probably the most technical track I’ve been on,” Kirkwood said. “The inner portion of Rockingham has lots of high speed, fourth-gear, nearly flat-out corners. It takes lots of confidence to be able to drive. Although it was a great day with plenty of laps, the technicality of the track did catch up to me at one point when I had a hiccup which sent me into the gravel trap in the last corner. Luckily, it was no big deal, and we learned a lot during the day.”

On Tuesday, Kirkwood completed a tour and track walk at the home of this year’s Formula Ford Festival, Brands Hatch Motor Racing Circuit.

“Brands Hatch is absolutely stunning,” Kirkwood said. “The amount of elevation in turn one is huge and almost scary when walking down it for the first time.”