Trans-Am Panel Talk Set For This Weekend in Watkins Glen 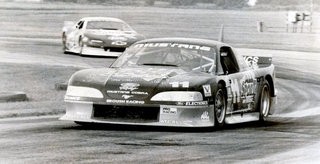 A panel of Trans-Am racing experts will speak about the series’ 50-year history at the International Motor Racing Research Center on Oct. 22.

The talk, free and open to all, will be at 1 p.m. at the Racing Research Center at 610 S. Decatur St., Watkins Glen. It is sponsored by the Watkins Glen Area Chamber of Commerce and is part of the IMRRC’s monthly Center Conversations series.

Listeners will hear Trans-Am stories from the perspective of drivers, crew chiefs and engineers.

Judy Stropus, who worked for several years as timer and scorer for Bud Moore Racing, the AMC Javelin team and Penske Racing’s Trans-Am competition, and as a public relations representative for Chevrolet, will be the panel moderator.

“This talk will bring together the pioneers of the Trans-Am series from the technical side as well as drivers from the past and present,” Stropus said. “The stories of the strategy that was used and the secrecy that existed in the early years to get that competitive edge should enthrall those in the audience.

“From the glory days when factory support was critical, to today’s independent race teams, the history of this iconic series will be covered from all sides. It’s a discussion that shouldn’t be missed,” she said.

The experiences of panel members will range from Trans-Am in its launch years, through the series’ racing in the 1980s and ’90s, the decline of the series in the early 2000s to today’s revived competition.

The Racing Research Center staff is planning special Trans-Am displays and will be showing films of vintage Trans-Am racing throughout the day.

The first race of the Trans-American Sedan Championship, quickly known simply as Trans-Am, was on March 25, 1966, a support race for the 12 Hours of Sebring (Fla.).

John Bishop, among the founders of the Racing Research Center and to whom the Center is dedicated, was executive director of the Sports Car Club of America when Trans-Am, SCCA’s first pro-racing series, was created as a manufacturers’ championship for modified racing sedans.

The series has evolved over the years and today is managed by the Trans-Am Race Co. and sanctioned by SCCA Pro Racing. Competitors race in five classes. Four races remain on the 2016 13-race schedule.