No “Off Season” for Formula Mazda Racer 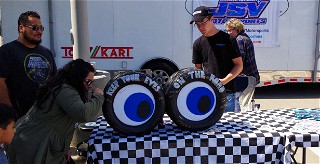 Jarret Voorhies, an 18-year-old Formula Mazda driver from Cresson, Texas, admits his 2016 racing season didn’t end exactly as he wanted.  During the SCCA National Championship Runoffs presented by Garmin VIRB at Mid-Ohio Sports Car Course, Voorhies spun off track on lap one while battling in the Formula Mazda lead pack.

Such letdowns can sometimes haunt racers well into the off season.  But that’s not the case for Voorhies who shook of the setback and returned to his second passion, helping spread the word about distracted driving.

“Even though my season ended in disappointment, I didn't get a lot of time to think about it,” Voorhies jokes. “I recently did an appearance with the Fort Worth Police Department where I took a set of used race tires, made them look like eyeballs, and then had people sign them as a pledge to keep their eyes on the road.”

The National Highway Traffic Safety Administration says 10 percent of all drivers 15 to 19 years old involved in fatal crashes were reported as distracted at the time of the accidents. This age group has the largest proportion of drivers who were distracted at the time of the incidents and, since 2007, have been observed manipulating electronic devices at higher rates than older drivers.

Those stats are scary to Voorhies, so for the past few years he has been working with the Texas Department of Transportation, Frisco Police Department, Mansfield Police Department and Fort Worth Police Department to present the AT&T “It Can Wait” campaign which educates teens about the dangers of distracted driving.  He also works on the State Farm #Drive2N2 campaign aimed at reminding those his age to drive with two eyes on the road and two hands on the wheel at all times.

“If I could make a difference in just one person’s life by getting them to put down the phone while driving, then it’s worth it,” Voorhies said.  “I can speak to fellow teens on a peer-to-peer level, and give a teen’s perspective to parents.  I use my racing experience for credibility. Not only does the race car make me credible to the people around me, but it also receives a ton of attention when displayed at various events.”

The SCCA Foundation, the charitable arm of the Sports Car Club of America, also actively engages with teens through Tire Rack Street Survival. These events go beyond antiquated high school driver education programs and give teens across the U.S. the skills and hands-on experience needed to become safer, smarter drivers.  Students become more observant of traffic situations and learn to look far enough ahead to anticipate unwise actions of others. As the students master the application of physics to drive their cars, they make fewer risky driving actions.

The school provides trained and qualified in-car driving instructors, as well as valuable classroom experience for each student. More than 100 events were held each of the last two years, and you can check out upcoming dates at the Tire Rack Street Survival website.

Kudos to everyone involved in the SCCA who also takes the time to spread the word about safe driving practices on everyday roads.  Every little bit helps.

Photo: Jarret Voorhies, wearing the Mazda hat, looks on as people sign his used racing tires as a pledge to keep their eyes on the road.