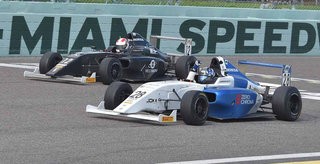 Das, who won nine of 15 F4 U.S. races this season, swept all three races over the weekend at Homestead-Miami Speedway and earned a $25,000 grand prize for leading the season-long points list.

“It feels surreal to be a champion” said Das, who drives for JDX Racing. “I can’t wait to see what comes next.”

Konrad Czaczyk of Loxahatchee, Florida, finished second in the season-long points list, while Kyle Kirkwood of Jupiter, Florida, earned third place to round out the podium.

Das, who has dominated the second half of the inaugural F4 U.S. Championship season, was unbeatable Saturday and Sunday with three wins, three pole starts and four fast lap times.

While Das finished the season strong, it didn’t come without contention from his fellow F4 U.S. drivers.

Das, who started on the pole, would make a minor mistake going into a turn which slowed him down just enough for Czaczyk, Skylar Robinson of Augusta, Georgia, and Baltazar Leguizamon of Buenos Aires to pass. Robinson and Czaczyk battled for first and would change positions multiple times during the first quarter of the race. The fight between the pair allowed Das to gain ground.

On Lap 3 exiting Turn 2, Czaczyk, in Position 1, took the race line too wide, putting two wheels of his black No. 47 Global Racing Group LAC car in the grass. The error would result in an exciting three-wide run for first in Turn 3 with Robinson on the inside, Czaczyk on the outside and Das between the two. Robinson moved into the lead but not for long.

As Das set his sights on Robinson, the pair raced down the front stretch and Das locked in on the draft set by Robinson. Advancing to Turn 1, Das made his move to sling-shot his ZeroChroma car to the outside of Robinson. Das succeeded with the pass for first and would not concede the position for the remainder of the race. Das finished the final round of the season more than eight seconds ahead of the pack.

Leguizamon would overtake Robinson to cross the finish line second for his highest finish of the season, while Robinson finished a nose ahead of Czaczyk for third.

“It was an amazing race,” said Leguizamon, who drives for Miller Vinatieri Motorsports. “I have to thank my team owner Jack Miller for trusting me behind the wheel. He promised me at least a third-place finish today, and here we are in second. This was a great way to finish the season.”

In the second race of the weekend on Sunday morning, Das gained the lead quickly and would not be challenged by the other drivers for the remainder of the session.

Robinson and Czaczyk exchanged position several times before Czaczyk pulled away for second place. Leguizamon would challenge Robinson for the remainder of the season until the two crossed the finish line for a photo finish. Leguizamon beat Robinson by less than three hundredthsof a second, which would end Robinson’s chase for championship podium placement.