Catching Up With Bryan Heitkotter (Or Trying To) 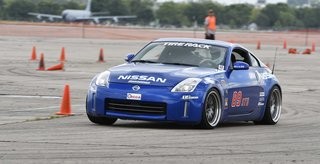 August and September were busy months for Bryan Heitkotter.

The Pirelli World Challenge GT driver has been running at the front of the field in his No. 05 Always Evolving/NISMO Nizzan GT-R GT3 all season, but broke through in the middle of August at Utah Motorsports Campus with his first win in a professional race. He followed that up the next day to score back to back wins.

He rode that high home and got his own car ready for the Tire Rack SCCA Solo Nationals Presented by Garmin VIRB, just two weeks later. There, he claimed his seventh SCCA Solo National Championship in his 2007 Nissan 350Z in Street Touring Ultra (STU).

While Heitkotter is pursuing a career in racing, autocross holds a special place in his heart. “I got into autocrossing when I was 18 and it was a lot of fun, and I met a lot of friends through autocross," he says. "That's one of the main reasons I still do – it because of all the friends I get to see who don't live where I live – so it's a chance to catch up with old friends and just have a good time. It's like vacation for me.”

He talked to RACER magazine about getting to this point in his career and what the future holds. Click here to read the full story.