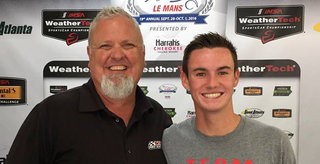 Oliver Askew, also of Jupiter, Florida, was awarded as the second recipient of the scholarship during a press conference held at Petit Le Mans at Road Atlanta in Braselton, Georgia on Friday.

The long-time friends and karting rivals will travel to England to represent the United States in the Formula Ford Festival in Brands Hatch, England, October 21-23 and the opportunity to race for the Walter Hayes Trophy at Silverstone, November 4-6.

“I am ecstatic and greatly honored,” said Kirkwood, a front-runner in the inaugural F4 U.S. Championship  with Primus Racing. “To be able to represent the USA is a feeling no words can describe. I will work vigorously to prove that Jeremy Shaw and the Team USA Scholarship judges have chosen the right person for the job. I am extremely excited for this opportunity and for the memories to come!”

F4 U.S. competitor Konrad Czaczyk of Loxahatchee, Florida, was included in the first round of candidate interviews.

Kirkwood and Czaczyk, along with Askew and three additional finalists progressed to a one-day shootout last week at an oppressively hot Palm Beach International Raceway in Florida hosted by Cooper Tire and the Lucas Oil School of Racing.

“The standard was extremely high and we were faced with some difficult decisions,” said Team USA Scholarship founder and auto racing writer and broadcaster Jeremy Shaw. “After much deliberation we chose Oliver and Kyle, but all of the youngsters performed well and would have been worthy recipients.”

The Team USA program was inaugurated in 1990 as a means of assisting talented young American drivers at an early stage in their careers. A young Jimmy Vasser was the first scholarship winner, followed by Bryan Herta in 1991. Subsequent winners include 2004 Indianapolis 500 winner Buddy Rice, Kimball, Newgarden, Pigot and Conor Daly, and accomplished sports car stars Andy Lally, Joey Hand, Bryan Sellers, Dane Cameron, Tristan Nunez and Miller all of whom will be competing in this weekend’s 19th annual Petit Le Mans IMSA WeatherTech SportsCar Championship race.

Kirkwood will finish the F4 U.S. Championship season at Homestead-Miami Speedway in Homestead, Florida October 6-9 before traveling to England the week after. Kirkwood currently holds down third place in championship points with an opportunity to advance.