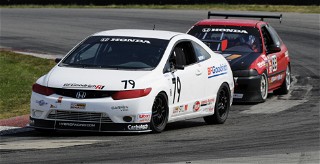 LEXINGTON, Ohio (September 24, 2016) – Kevin Boehm, of Marysville, Ohio, and Eric Kutil, of Columbus, Ohio, both climbed out of their Super Touring Lite cars after 23 laps around Mid-Ohio Sports Car Course on Saturday at the SCCA Runoffs presented by Garmin VIRB having used up their brakes. But that didn’t slow the on-track action for the pair, with Boehm finishing 0.719-second ahead for his second consecutive National Championship. Cliff Ira, of Kansas City, Missouri, completed the podium.

Boehm’s No. 79 BFGoodrich/HPD/Hondata/Red Line Honda Civic Si left the field at the green flag from the Tire Rack pole position, and built a steady lead of over three seconds in the early stages of the race. Every tenth of that was necessary, as it turned out, when by lap 19, Kutil’s No. 82 Auto Assets Honda Civic Si was stuck to the bumper.

Boehm used his racing experience to deal with fading brakes late in the race, slowing into the Keyhole turn to get a good run out and down the back straight, then going just as fast as necessary to cool the brakes in the back part of the track.

Kutil tried several times to get by on the inside of the carousel – a notoriously difficult place to make a pass at Mid-Ohio. The two ran side by side on three different occasions, including coming to the white flag, but Boehm made sure to hold the inside line coming onto the short front straight, across the stripe, still in the lead.

“It’s really great to be up here on the top step again,” Boehm said. “When you’re at one of these events and the competitors are as good as they are here, it’s so rewarding to be able to pull it off. It’s such a long week, there’s so much that can go wrong. Even just putting it all together over the whole season to qualify just to be here is awesome. Congratulations to Eric and Cliff, they pushed me and the car to the limit. Definitely glad that people like that show up to the Runoffs, it’s not fun to just run away with it. Being forced to really look at every detail of the car and hit every mark, it’s really rewarding.”

Part of the Honda of America Racing Team, Kutil took a much different path to the Runoffs podium than most SCCA Club Racers. Just a year ago, Kutil attended his first track day – ever. Having enjoyed that, he decided to join his coworkers on the HART team, and got a racing license. With just about 365 days of experience in track activities, Kutil now has a silver medal.

“My brakes started getting pretty soft because I had some tiny rotors on there,” Kutil said. “I couldn’t brake where I wanted to, and the only corner I could maybe stick my nose was the Carousel. I may have given Kevin a couple of love bumps there, trying to get him out of the way. But it was a fun race. I didn’t want to dive bomb him and try to lock up or ruin both of our days, so I tried to play it safe and pass where it’s most possible.

“I don’t really have much experience, maybe video games when I was younger. I autocrossed when I was in college, and then last year I started doing track days and decided to buy a race car and try this out. I guess I had to learn pretty quick to keep up with these guys.”

With a third place finish on Saturday, Ira now has a complete set of podium finishes, following a win and a second in the last two years. Pushing hard, he had nothing for the top two places but was locked securely in third.

“I was digging as hard as I could, and usually when you’re behind you tend to dig a little bit deeper,” Ira said. “I did everything I could to try to catch up to these guys. I could see them. I tried to drive as smooth and as fast as I could, and usually my car is good on longer runs. It just didn’t have enough for them. Congratulations to Kevin and Eric, they drove a great race. I gave it all I had to not overdrive the car and be as smooth as I could. It’s good for us. It’s my second weekend here, ever, and I think we did as well as we could not spending a lot of time here. Love the track, love the facility, and had a lot of fun.”

While the live broadcast of all 28 National Championships is available live at SCCA.com, each race will be on demand in the coming weeks.

Photo: Kevin Boehm has a mirror full of Eric Kutil on his way to an STL win.
Credit: Jay Bonvouloir