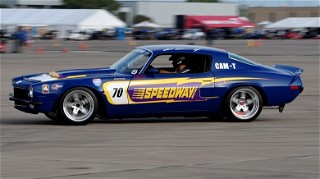 LINCOLN, Neb. (Sept. 13, 2016) – The fourth and final CAM Challenge powered by SCCA event of the year took place September 2-4 at Lincoln Airpark in Nebraska as a precursor to the 44th Tire Rack SCCA Solo Nationals presented by Garmin VIRB. Nearly 70 drivers across three classes joined in the weekend’s CAM Invitational.

Cool weather welcomed CAM racers that Saturday morning with dry runs hovering in the 40-second mark.  But after lunch, rain moved in for the afternoon, meaning drivers then had to test their skills in the wet.

In the 34-car CAM-C field, Saturday morning runs were dominated by Brett Madsen in a Ford Roush Mustang who built a 1-second lead on JG Pasterjak’s Ford Mustang in second.  Dave Feighner was third in a Ford Mustang.  But in damp afternoon runs the order changed dramatically.  Feighner went to the top of the chart with Keith Lamming coming from sixth in his Chevrolet Camaro to claim the runner-up spot.  By the end of Saturday, 2.4 seconds separated the top 11 drivers in CAM-C, and Mustangs claimed nine of the top ten finishing positions.

Rounding out Saturday competition was CAM-S where Mike Losert won on Saturday by .365-second in his Chevrolet Corvette, being the fastest CAM-S car in the morning and afternoon sessions.  Shawn Lambert, Mike Johnson, Eric Brown and Richard Jung were close behind in their Corvettes.

Sunday brought about the CAM Challenge portion of the weekend in the dry.  In CAM-C, Brian Mason and Keith Lamming faced one another in the final where Lamming emerged victorious.  The CAM-T Challenge winner was Robby Unser who bested Chris Carmenini, and the CAM-S Challenge was won by a razor-thin margin of .067 second by Mike Losert over Shawn Lambert.

The overall CAM Challenge Final at Lincoln Airpark, the last faceoff of the year, was won by Unser with a .105-second margin over runner-up Losert.  Lamming finished third in the tight competition.

As a reward for his performance, Jung got the automatic invite to the Good Guys Finale in Scottsdale, Arizona, later this year.  Also, Kelly Jaeger received the “Spirit of CAM” award for her efforts to organize and help drivers once they arrived at the venue in Lincoln, Nebraska, and encouraged many racers to also compete in the Tire Rack SCCA Solo Nationals presented by Garmin VIRB.

The three CAM Challenge Classes (CAM-C, CAM-T, CAM-S) were developed to give traditional and contemporary American muscle car sedans and coupes -- with front-engine, rear-wheel-drive configurations -- and American sports cars from the 1960s and 1970s a place to compete in a controlled environment. Each car must be street legal, licensed and insured, have intact interiors and use a 200 treadwear street-legal tire.  Additional background can found at the CAM Challenge webpage.