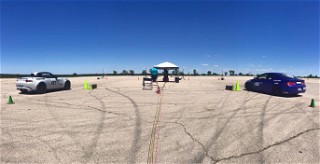 TOPEKA, Kan. (June 8, 2016) – Saturday runs at the Tire Rack Mineral Wells ProSolo ended on a disappointing note as a handful of drivers had their second session runs pushed back until Sunday morning so patch work could be done to the course. But nothing could dampen the enthusiasm of the record-breaking 202 competitors that enjoyed an excellent course designed by Vivek Goel. The layout was epic in size and speed for a ProSolo course, as many have come to expect from Mineral Wells.

By Sunday morning, the course was repaired and the few drivers that had been delayed the previous evening were sent out early to get in their missed runs. The largest gap between first and second in a Class came in A Street.  David Hedderick used Sunday to stretch his lead to 2.571 seconds over Iain Peebles.  The wide-open course helped limit Hedderick’s cone carnage to just two the entire weekend.  Peebles’ co-driver, Rick Martinez, was able to pick up time on Sunday and slot into third place by just .187 second over Nick Gruendler.

Track designer Vivek Goel won B Street in a tight race as Todd Roberts was just behind all weekend and eventually finished only .055 behind. Jeremy Foley negotiated a co-drive in Kerry Emmert’s BMW M1, and finally figured it out enough on Sunday to get into third place.

There was no shuffling among the top three in C Street as Tyler Kvetko stretched his lead over 2015 National Champion David Ogburn to .529 second on Sunday, proving the 2016 Mazda MX-5 to be a viable platform in the Class. Chris Levitz finished third with Matthew Leach and Eric Jones rounding out the trophy spots.  D Street and E Street saw little change, too, from the opening day with DS driver Tom Reynolds and ES pilot Paul Brown both finishing first.

Ricky Crow must have found some speed behind the hotel dresser Saturday night because Sunday was his day to move up in Street Touring Roadster. He bumped Kerry Coughlin down to second, .664 second behind.  Chris Leclair and Michael Willman rounded out third and fourth.

In Race Tire 2, Erik Strelnieks came away with yet another ProSolo Class win. This time getting some competition from co-driver Troy Acosta.  And the Race Tire 1 first-place trophy went home with Jason Hobbs who topped co-driver Matt Murphy by 1.190 seconds.

The Ladies Challenge featured some great female autocross talent. The final four featured Meredith Brown and her MR2 against Jordan Towns in the WRX, and Su Brude in a beautiful Super Street Prepared 911 Turbo against Deana Kelley wielding a 2016 Mazda MX5.  Towns and Kelly moved on to the finals. That set up Brown vs Brude in the matchup for third, which would eventually go to Brown.  In the finals, the dreaded red light ended Towns’ shot at the Ladies Challenge title, handing it to Kelly.

The Bonus Challenge final four featured C Street Scion drivers Nathalie Lepine and Brandon Slater in one matchup, and Charles Cram in a C5 Z06 facing Michael Currie in a 1993 20B RX7. Lepine and Currie won their matchups and met in the finals.  For the Bonus Challenge finals, Nathalie Lepine had an almost 10-second head start over Michael Currie.  And while the RX7 was capable of closing multiple seconds against the Scion, the gap proved too much as Curie fell to Lepine.

The Super Challenge elite eight featured James Harnish against Tyler Kvetko. Harnish had beaten top qualifier David Hedderick in round two, but stumbled against Kvetko by red lighting after switching sides.  The second top-eight matchup pitted Paul Brown against David Whitener who uses Mineral Wells as his home practice site.   That home court advantage was enough to move Whitener to the next round.  Then Brad McCann took on Eric Hyman who had benefited from Strelnieks’ red light in round two.  He should have hoped for McCann to red light because the Hyundai Genesis and its head start proved too much for the GT-R Nissan.  For the final matchup in the round, Kim Whitener -- a four-time Ladies Challenge champion -- paired up against Ricky Crow.  Now driving in open competition, Kim watched as Crow jumped early and earned a red light, the same as Ken Orgeron had done in the round before against her.  Kim would go on to beat Brad McCann after he picked up a cone.  Kvetko was the only thing impeding an all-Whitener final, with both Whiteners currently positioned in the top ten in points for the year.  But Kvetko’s win over David put him up against Kim for the final round.  McCann and David Whitener met in the third-place matchup, and McCann was victorious.  After being the beneficiary of multiple red lights in the early rounds, Kim Whitener became the victim and handed the 2016 Mineral Wells ProSolo Super Challenge Championship to Kvetko.

Full results can be found at the Tire Rack Mineral Wells ProSolo webpage. Additionally, both the Challenge and Class points have been updated and can be reviewed at the ProSolo Point Standings webpage. Next on the SCCA ProSolo calendar is the June 10-12 Tire Rack Toledo ProSolo at Toledo Express Airport in Swanton, Ohio.