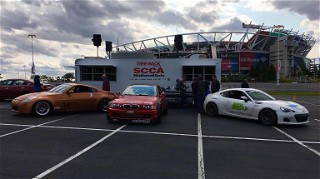 TOPEKA, Kan. (May 18, 2016) – Springtime in the Mid-Atlantic means Mother Nature gives you a little bit of everything, and that's exactly what competitors got at the Tire Rack Washington DC ProSolo this past weekend.

Rain on Friday during course setup gave way to beautiful skies and dry pavement for practice starts and course walks. The sun was back out on Saturday and temperatures climbed into the 70s throughout the morning, but a rainstorm moved in during Group 4's afternoon runs leaving more than half of the drivers without a chance to improve.  Sunday brought challenging conditions, with high winds keeping course workers busy chasing windswept cones and low temperatures leaving many struggling to build heat in their tires.

The courses by Lee Piccione featured long uphill straightaways at the start, with long downhill acceleration zones separated by a mix of slower on- and off-camber corners. Finishing up with off-camber entries to three-cone slaloms, both sides made it very challenging to put together a fast run.  Even if you hit every mark perfectly, a bad launch up the hill would negate the rest of your run.  When drivers got everything right, it was a very rewarding experience.

B Street saw a great four-way battle between Justin Whitehead in his 370Z and a trio of Corvettes driven by Andrew Graul, Joseph Barbato and Ricardo de Leon. Barbato had the fastest left-side time on day one, but coned away his fast right-side times.  Graul posted the fastest right-side time and earned the top spot for Saturday, and Whitehead stuck it to the other Corvettes with a combined time just two tenths behind Graul.  On Sunday morning, Barbato stayed clean and put down the fastest right-side time, moving himself to the front of the pack.  Also on a mission to jump a few positions, de Leon threw down the fastest left-side time and leapfrogged to second place, just nine thousandths ahead of Graul.  With only a hair more than half a second between the top four drivers, it was quite a show.

Street Touring Sport also put on quite the spectacle with a similar shakeup on Sunday. With a wet course on Saturday afternoon, the Class was left standing on their times from the first heat.  Julian Garfield had the lead by half a tenth over Benjamin Wagstaff, with Mike Snyder just two tenths behind.  On Sunday, Garfield was unable to find time as first driver on cold tires and was bested by his father, Brian Garfield.  Wagstaff jumped into first place with the fastest left-side time and Snyder moved up to second with the fastest right-side time, with the Garfields rounding out the trophies.

In the Ladies Challenge, Rachel Baker knocked out Stephanie Reeve and Tamra Hunt to get to the final round.   After a red-light by Shelly Monfort, Sara Odioso then took out Jennifer Bedell in the second round.  Feeling the pressure, Baker coned her left-side run and handed the win to Odioso.  The Bonus Challenge saw Laurence Casey against Wojtek Hajduczek in the final round, with Hajduczek edging out Casey for the win.

The Super Challenge saw breakout after breakout as the day's temperatures peaked and drivers finally got some heat into the tires. After facing Chris Faircloth in the opening round, John Vitamvas moved on to face Mark Daddio in the second round.  Daddio pushed a bit too hard and tagged a cone, allowing Vitamvas to continue on to defeat Cy Lee in the quarterfinal and Sam Strano in the semifinal.  Fresh off his dominant Street Touring Xtreme win, David Marcus bested Michael Natilli in the first round, Mike Snyder in round two, and Ryan Lower in the quarterfinal.   Billy Davis fought hard against Marcus in the semifinal, but it was Marcus that got to face Vitamvas in the final round.  Vitamvas took the hard-fought victory, his first-ever Super Challenge win.

For full results from the 2016 Tire Rack Washington DC ProSolo, visit scca.com/pages/prosolo. Next on the ProSolo calendar is the May 26-28 Tire Rack Lincoln Spring Nationals ProSolo at Lincoln Airpark in Lincoln, Nebraska.