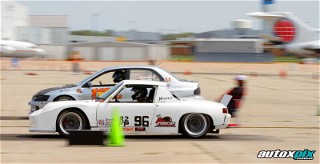 TOPEKA, Kan. (May 11, 2016) -- If you’ve been to Ohio, you know the weather is pretty unpredictable this time of year. This past Saturday was no exception during the Tire Rack Wilmington Spring ProSolo as constant winds and rain threatened midday activities, but held off so everyone got in their eight runs. Then on Sunday, beautiful and warm conditions graced competitors at the Wilmington AirPark facility, with nearly no wind of which to speak.

With a tight and very challenging course layout, most drivers found it extremely hard to put together a complete run. Hard braking zones along with some very tight-angle turns meant precision was of the utmost importance.  The ability to dig out of slow corners was also one of the highest priorities, and it showed in a lot of the results.

Starting off the weekend with some strong Saturday afternoon runs was David Marcus, the 2015 Super Touring Xtreme National Champion, who was the first driver in STX to dip into the low 35-second lap times with a 35.145 on the “right” course. He aided that time with a strong 35.612 on his afternoon “left” run to achieve a 7/10ths lead over course designer Kyle Herbst in a 2012 BMW 128M.  On Sunday morning, Herbst found 2/10ths on both the right and left courses, but Marcus also found some time to maintain a .742-second lead at the end of the session, thus punching his ticket as the #5 Qualifier in the Super Challenge.  And in Race Tire 1 it was the Clemens Burger show all weekend in his LeGrand Mk18 where his opening time of 30.369 seconds earned him the #1 Qualifier spot for the Super Challenge.

The Race Tire 2 Class ended up being the battle of “Besties.” Friends Tom O’Gorman and Dave Montgomery went at it all weekend in monster vehicles with impressive launch capabilities.  O’Gorman started off strong Saturday morning in a Mitsubishi Lancer earning a pair of low 33-second run times to obtain a 1.3-second gap over the rest of the class.  Not happy with his driving performance, Montgomery in a Porsche 914-6 made adjustments and came back in the afternoon session to drop his times and spring into the lead by .25 seconds.  Sunday morning rolled around and the two were lined up head to head at the front of the grid.  But it was Montgomery who walked away with the slimmest of victories.

Super Street Modified was again a Class to watch over the weekend. Out to an early lead after the Saturday afternoon sessions, Randall Wilcox driving the Anderson Miata ended the day with a healthy 1.2-second lead over past SSM Champion Matt Glagola in an orange Lotus Elise.  After making some minor shock and tire pressure adjustments, Glagola went out Sunday morning and became the only SSM driver to break into the 32-second mark on the right track, and then proceeded to do the same on the left, resulting in .391-second margin of victory over Wilcox.

The Ladies 1 Class appeared to be anyone’s game at the start of the weekend. Wielding her newly built SSP Porsche 911 Turbo 4S, detuned to 600whp, Su Brude started off Saturday with an early lead.  It wasn’t long before Tamra Hunt, the 2015 Rookie of the Year, put down a 33.8-second lap for the lead.  On Sunday, Hunt found another 8/10ths to end the weekend 1.8 seconds ahead of second place.

The Super Challenge became a “Tale of Two Davids” as David Marcus, in a Scion FRS, and David Spratte, in his H Street MINI, were on a trajectory to do battle. Marcus took a somewhat Street Prepared route, first knocking off E Street Prepared drivers Jason Kolk and David Heinrich before besting D Street Prepared/Bump 2 driver Eric Campbell. Against Mike Snyder in the Semi-Finals, Marcus broke out to move along to the Championship round.  Spratte had a more diverse route to the Championship round, taking out A Street’s Danny Popp first, then Street Touring FWD’s Daniel Gross before beating James Yom of Street Touring Roadster for entry into the Semi-Finals.  There, Spratte faced the winner of his Class, Philip Mitchell, who had broken out in the previous round.  Spratte took the win and moved on to challenge Marcus.  As the rain started to come down, both drivers went out for their runs.  Marcus would catch a cone on his try, and Spratte would use that to carry himself to the win.

For full results from the 2016 Tire Rack Wilmington Spring ProSolo , visit scca.com/pages/prosolo. Next on the ProSolo calendar is the May 13-15 Tire Rack Washington D.C. ProSolo at FedExField in Landover, Maryland.

Photo: Dave Montgomery and Tom O’Gorman had a heated R2 Class battle this weekend at the Tire Rack Wilmington Spring ProSolo. Montgomery went on to win the Class in his Porsche.