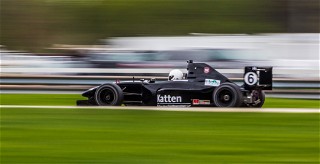 SOUTH BELOIT, Ill. (May 1, 2016) – Flip over the calendar and bring on the dry weather! At the second day of the SCCA U.S. Majors Tour Northern Conference races at Blackhawk Farms Raceway, drivers welcomed dry skies after a rainy conclusion to April.

Although the skies remained overcast and temperatures never broke 60, drivers and workers alike were grateful for dry racing conditions in the second round of the U.S. Majors Tour Northern Conference. New track records fell and close finishes marked the end of the doubleheader weekend.

The dry conditions brought a bit more confidence in the drivers. Group Four started with a bump, with the E Production front row of Breton Williams and Jon Brakke making side-to-side contact before the first attempt at a start. The starter reacted with a wave off, forcing a second attempt. On the second attempt, the group was able to make a clean start. Williams took the early lead in his Breton Williams Racing/Jesse Prather Motorsports Mazda MX-5. John Braake settled into third overall and in EP before beginning a determined march to the front. Just as Brakke caught Williams, he retired to the pits with mechanical issues, with Williams following suit just a few laps later. That allowed Steve Smyczek to adopt the lead in his Slip Shield Mazda RX-7. He would hold on for the duration and claim the E Production win.

In yesterday’s rain, 17-year-old Becker Reardon ran an impressive Formula Enterprises race, dominating in his Katten Muchin Rosenman LLP Formula Enterprises/Ford. After admitting that his qualifying effort on Sunday morning wasn’t strong, forcing him to start fifth in the class, Reardon drove his way to the lead on lap 16. He held on through the remainder of the race and his weekend sweep give the youngster an early points lead in the U.S. Majors Tour Northern Conference.

The weekend concluded with Group Seven’s second race. Andy McDermid has become known around the Northern Conference and SCCA Club Racing for doing victory burnouts in his Weather Tech/Felice Performance/Lane Automotive Ford Mustang during victory laps. After a flag-to-flag victory on Sunday, McDermid held to his tradition, lighting up the rear tires on both the front and back straightaways for all of the spectators and workers to see.

The day took a brief, solemn break following lunch to honor the life of Bob Lybarger. Lybarger was an SCCA member for more than 50 years before passing away last December. Lybarger started in SCCA as a corner worker, but was best known as a Formula Vee driver and member of the SCCA Board of Directors. He is in the CenDiv Hall of Fame, was a Blackhawk Valley Region Member of the Year, and held the role of BVR Regional Executive for two terms. The safety trucks and pace cars led the Group Three field around the track for a lap with the corner stations waving their entire arsenal of flags. It was a moving memorial for an influential member in the area. Video of the memorial can be found here.

The SCCA U.S. Majors Tour Northern Conference continues June 3-5 at Mid-Ohio Sports Car Course. More information on each of the U.S. Majors Tour events, including the four run this weekend can be found at SCCA.com/Majors.