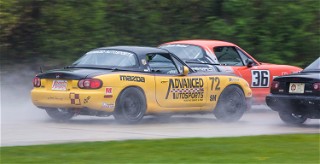 SOUTH BELOIT, Ill. (April 30, 2016) – Wet and cold were the most-heard words out of drivers’ mouths as they climbed out of their cars following the SCCA U.S. Majors Tour races at Blackhawk Farms Raceway. Today’s races are the first round of the U.S. Majors Tour Northern Conference, with 12 rounds scheduled through the summer months.

Corner workers returned to their stations after lunch to be greeted by the constant pouring of rain that remained through the evening. As a result, groups six and seven were forced to qualify in the rain and all groups battled the conditions through their 20-minute races.

The restricted modifications and equalized cars of Spec Miata generates close racing that requires drivers to be at the top of their game to achieve victory. That is even more true in inclement weather. Justin Hille started on the pole in his Hilltrux/ROUSH Mazda Miata and would have a dominating presence throughout the race. Voytek Burdzy started seventh in his Advanced Autosports Miata, but fell back on the first lap. Burdzy loves racing in the rain though and did not let the early setback kill his chances of winning. He was able to put his head down and ultimately took the lead from Hille on lap eight. He was then able to create a gap and manage it through the completion of the race. Josh Bilicki completed the podium in his Trim-Tex/Hoosier/Dark Horse Miata.

David Bednarz started on the pole in F Production in his Dynomax Performance Exhaust Mazda Miata and was able to hold that lead through the majority of the race, followed by Robert Perona and Sam Henry in their Mazda Miatas. On the final lap of the timed race, Bednarz caught some lap traffic allowing Perona and Henry to close the gap and challenge for the lead. Henry snuck by, and was the first to the finish line in his Springfield Dyno/SafeRacer-sponsored Miata, with a final margin of victory at just 0.4-second. Gerald Lamb finished off the F Production podium in his MG B.

Round Two of the SCCA U.S. Majors Tour Northern Conference continues Sunday with all seven races in what most drivers hope to be much different conditions. Racing will follow 15-minute qualifying sessions at approximately 10:35 AM CDT. More information on each of the U.S. Majors Tour events, including the four running this weekend can be found at SCCA.com/Majors.

Image: Voytek Burdzy fights his way through the Spec Miata field to take the win, in the rain, at Round 1 of the SCCA Northern Conference U.S. Majors Tour.
Credit: Hillary Anderson Frank