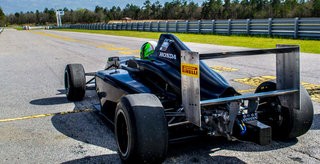 SCCA Pro Racing, which is organizing and sanctioning the new F4 series, has announced an agreement with North Carolina-based Carolinas Production Group to produce and distribute the seven 30-minute programs throughout the series.

“We are excited to reach an agreement with the team at Carolinas Production Group to provide coverage of the new F4 series,” said Derrick Walker, president and CEO of SCCA Pro Racing. “These newsmagazine programs will allow F4 to showcase some of the best young drivers in the sport and their journey throughout the season.”

“F4 United States Championship Today” will focus on the creation of the car, the launching of the series and the young talent coming competing in the inaugural season. It will also showcase highlights of each race along with driver interviews and features. The final episode will provide season highlights and a series recap.

“It's a great honor for us to be selected by SCCA Pro Racing to create, produce, and distribute ‘F4 United States Championship Today,’” said Rick Benjamin, Carolinas Production Group principal and motorsports broadcaster. “This is going to be an oustanding series with tough competition, hard racing and a host of young driving talent all wanting to race their way to stardom. We're thrilled to be able to chronicle the series, the racing and the stories of those competing.”

The F4 series will consist of 15 races at five classic tracks when it kicks off at Lime Rock Park in Lakeville, Connecticut, on May 27-28 and is scheduled to wrap-up Oct. 8-10 at Homestead-Miami Speedway in Homestead, Florida.