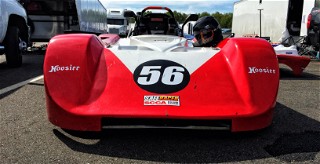 This weekend’s SCCA U.S. Majors Tour at VIRginia International Raceway will see nearly 60 drivers in Group 2, which encompasses Spec Racer Ford and Spec Racer Ford Gen3 competitors. And even though VIR’s 18-turn, 3.27-mile track provides plenty of room in theory, racing with 60 of your closest friends comes with its challenges.

The first hurdle comes during qualifying Friday and Saturday in Alton, Virginia. John Hall, an SRF3 pilot from Vienna, Virginia, said his approach is to simply accept the fact that qualifying is going to be a test.

“There’s a huge field here,” Hall said while working on his car after the morning practice Friday. “You’ll never be able to figure out what everybody else is doing.  You’ve just got to be flexible.  The goal is to qualify at the front of the field to make the start of your race easier.  But to achieve that, you have got to find a gap somewhere on the track during qualifying and realize you may only have one shot at getting that one good lap.”

“It’s going to be a give-and-take out there. We’ve got to be a little more cautious with so many cars,” Reams said after practice.  “The first couple turns are going to be pretty crowded.  Some guys are going to be really aggressive.  I think the key is to hold your line when you go into those corners.  You’ll also need to watch your mirrors a lot more.  There will be a lot of three-wide racing on the front stretch and some of the faster guys might be diving into corners where they hadn’t before.”

In the mix this weekend are a couple SCCA Runoffs National Champions running in Group 2, so the competition will likely be pretty interesting during the 25-minute race Saturday and 35-minute (or 16-lap) event Sunday. Be sure to catch the action both days with live timing and scoring, lap notes and more via the SCCA® Pit Board available through www.scca.com/live.

Photo: The SRF3 of driver Richard Stephens waits to do battle in the 60-car Group 2 field this weekend at VIRginia International Raceway.