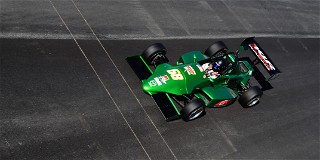 AVONDALE, La. (February 27, 2016) – While much of the country is still in a winter stupor, the weather Saturday in Southern Louisiana was simply flawless for racing. Temperatures hovered in the 60s throughout the day without a cloud in the sky. The racing matched the perfect weather with close competition and fast laps. Eight track records were set thanks to the prime conditions for speed.

The eight entries in Formula Mazda were given the opportunity to race solely amongst themselves thanks to a split start in Group 2. From the green, 15-year-old Jacob Loomis dominated the class. He was able to lead flag to flag and take home a win at the SCCA U.S. Majors Tour.

SCCA’s spec classes are a favorite for spectators because of the close racing provided by even car performance. Today’s battle in SRF3 delivered on this expectation. This class represents the third generation of Spec Sports Racers built by SCCA Enterprises. The third generation features minor changes from the second, most notably lighter minimum weight and a larger engine. These upgrades keep the same close racing that is expected from the Spec Racers, with higher speeds and greater agility.

The race started with Brian Schofield leading the pack to the green flag in his PM Racing Spec Racer Ford. Schofield led for two laps officially before Denny Stripling took over the top spot in his Southeast Spec Racer/Planting Seeds CC Spec Racer Ford. Schofield stayed close at hand as the top four in class ran as a tight group for the entirety of the race. Stripling gave up the lead after two laps to the Ayres Racing Spec Racer Ford of Tray Ayres. Ayres continued to lead for five laps. With three to go, Stripling regained the lead -- but it would be short-lived. Ayres made a last-lap pass to lead the only lap that really counts and won the race.

The fifth group of the day held the most diversity with ten car classes being represented in the Production, Street Touring, and Touring categories. Being the lowest-powered class did not keep the B-Spec drivers from putting on a great race. Teammates Chi Ho and Darren Seltzer passed the lead back and forth in their BFGoodrich/HPD/Dynasty Auto Honda Fits, with the win finally going to Ho following side-by-side racing through much of the last laps.

Meanwhile, the Super Touring Lite race raged on farther forward in the pack. Brian Laughlin dominated most of the race in his Tulsa Radiology Associates/Mazda/Hoosier Mazda Miata. Throughout the late stages of the race, Bruce Andersen closed the gap in his Senson Racing Grp/Autotechnik Racing Mazda Miata. He caught Laughlin on the last lap and was able to execute the pass, only leading the final lap but taking home the checkered flag.

U.S. Majors Tour racing continues tomorrow with round two of the Mid-States Conference and round six of the Southeast Conference. More information can be found at SCCA.com/majors. Follow along at SCCA.com/live.